Tonight, 21 Savage is releasing his second studio album I Am > I Was. The album has been teased since mid-October, and will be Savage’s first official release since Without Warning, his collaborative album with Metro Boomin and Offset.

I Am > I Was will be released at 9 p.m. PST on Thursday (Dec. 6) or midnight Eastern on Friday (Dec. 7) depending on your time zone. We’ve listed the different platforms that the album will be released on, and the ways in which you can listen to them below.

Dam I forgot to drop my album my bad y’all

UPDATE: 21 Savage tweeted out that the album was delayed on Twitter. “Dam I forgot to drop my album my bad y’all,” he wrote. He did not provide a future release date.

You will be able to stream 21 Savage’s new album on iTunes and Apple Music. If you have an Apple Music account, you can go into the app on your phone or tablet and set the notifications to alert you when the album is out. Click here to learn how.

when the album done ?

Based on the standard release schedule for Spotify, 21 Savage’s I Am > I Was will also be available to stream on the platform. If you don’t have a Spotify account, you can sign up for one here and pay only $0.99 for the first three months.

21 Savage’s album will also be available to listen to on Tidal. The streaming service offers a free 30-day trial with Tidal Premium, which provides  access to music videos and curated playlists.

drop a ? if you ready for my new music ?

I Am > I Was has been shrouded in mystery since it was first announced. 21 Savage teased that it would be arriving sometime in “Octember,” before revealing that the official release date would be December 7 on Twitter. Despite the confirmed release date, however, Savage has kept details about the album under wraps, from the artwork to the rumored guest features.

21 Savage finally revealed the album artwork on Thursday, as he posted it on Instagram with dozens of GOAT emojis in the caption. Check it out below. There has yet to be an official tracklist, but the rapper did tease a new track on IG on November 26. “We been getting that Jewish money, everything is Kosher,” Savage raps. It has not yet been confirmed whether the untitled track will appear on I Am > I Was or other future releases.

Speaking with XXL, 21 Savage said that he wanted to go back to his streets roots on the new album as opposed to the more commercial sound of his studio debut Issa Album. He referenced early mixtapes like Slaughter King, The Slaughter Tape, and Free Guwop as examples.

“I’m going back gangsta,” he revealed. “I’m going back to what brought me in the door… I wanna get back on some gangsta sh*t ’cause I feel like everybody rap about money and cars all day. Like they say I be rap about too much guns and shit, but that’s what the hell be going on. That’s what really be going on, like, in real life.” 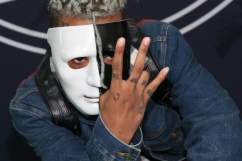