Tracy Reiner, the only child of Rob Reiner and Penny Marshall, is an actress in her own right having appeared in “A League of Their Own” and “Big.” TMZ was the first to report on December 18 that Marshall had died at the age of 75. The website gave her cause of death as complications caused by diabetes.

Marshall is survived by her sister, Ronny Hallin, 80, and her daughter Tracy Reiner, 54. Marshall’s brother, the legendary filmmaker Garry Marshall, passed away in 2016. On Marshall’s official Facebook page, a brief message read, “Our family thanks everyone for the kind messages and thoughts. Losing Penny is hard to endure. Keep her sister Ronny, Daughter Tracy and grandchildren Spencer, Bella and Viva in your prayers.”

Here’s what you need to know about Tracy Reiner:

1. Tracy’s Biological Father Is Michael Henry But She Was Adopted by Celebrated Director Rob Reiner

In 2012, Marshall spoke candidly about giving birth to Tracy in an interview with Newsweek. Marshall spoke about Tracy’s father, Michael “Mickey” Henry, as a football player in her college, the University of New Mexico. Marshall said Tracy was conceived because Henry was sad about being dropped from the football team. When Marshall discovered she was pregnant, the pair got married which happened to be in the days after JFK’s Assassination in November 1963.

Marshall vaguely describes divorcing Henry and marrying Rob Reiner adding, “Tracy came to stay with us—she said we had more TV channels. I did have to send her off to college while wearing a Playboy Bunny suit because it was during the shooting of that episode of ‘Laverne & Shirley.'” Tracy said in a 2011 interview with the Hollywood Sentinel that she grew up between Los Angeles, New Mexico and New York City. During her time in high school in Los Angeles, Tracy enrolled at Colfax Avenue School, which is also the alma-mater of Molly Ringwald, Claire Danes and Jodie Foster. 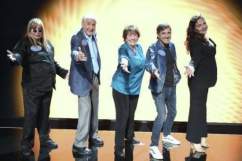 Tracy has had a vast acting career in her own right, according to her IMDb page. In the 1970s, Tracy appeared in multiple episodes of her mother’s sitcom, “Laverne & Shirley.” More famously, Tracy had substantial roles in the movies, “A League of Their Own,” “When Harry Met Sally…” and “Masque of the Red Death.” In her interview with the Hollywood Sentinel, Tracy said she worked on “Saturday Night Live” for three seasons. During the same interview, Tracy said that she has had her Screen Actors Guild card since she was 15 years old.

Racine Belles Win the Game – A League of Their Own (7/8) Movie CLIP (1992) HDA League of Their Own movie clips: http://j.mp/1CQS2uD BUY THE MOVIE: http://bit.ly/2cqjEQZ http://amzn.to/rHn50j Don't miss the HOTTEST NEW TRAILERS: http://bit.ly/1u2y6pr CLIP DESCRIPTION: Dottie (Geena Davis) tells the pitcher how to strike out her sister Kit (Lori Petty), but Kit proves them wrong with a home run that wins the game. FILM DESCRIPTION: The All-American Girls' Professional Baseball League was founded in 1943, when most of the men of baseball-playing age were far away in Europe and Asia fighting World War II. The league flourished until after World War II, when, with the men's return, the league was consigned to oblivion. Director Penny Marshall and screenwriters Lowell Ganz and Babaloo Mandel re-create the wartime era when women's baseball looked to stand a good chance of sweeping the country. The story begins as a candy-bar tycoon enlists agents to scour the country to find women who could play ball. In the backwoods of Oregon, two sisters — Dottie (Geena Davis) and Kit (Lori Petty) — are discovered. Dottie can hit and catch, while Kit can throw a mean fastball. The girls come to Chicago to try out for the team with other prospects that include their soon-to-be-teammates Mae Mordabito (Madonna), Doris Murphy (Rosie O'Donnell), and Marla Hooch (Megan Cavanagh). The team's owner, Walter Harvey (Gary Marshall) needs someone to coach his team and he picks one-time home-run champion Jimmy Dugan (Tom Hanks), who is now a broken-down alcoholic. After a few weeks of training, as Dugan sobers up, the team begins to show some promise. By the end of the season, the team has improved to the point where they are competing in the World Series (which is no big deal, since there are only four teams in the league). CREDITS: TM & © Sony (1992) Cast: Geena Davis, Lori Petty, Tom Hanks Director: Penny Marshall Producers: Elliot Abbott, Ronnie D. Clemmer, Robert Greenhut, Joseph Hartwick, Amy Lemisch, Penny Marshall, Bill Pace Screenwriters: Kim Wilson, Kelly Candaele, Lowell Ganz, Babaloo Mandel WHO ARE WE? The MOVIECLIPS channel is the largest collection of licensed movie clips on the web. Here you will find unforgettable moments, scenes and lines from all your favorite films. Made by movie fans, for movie fans. SUBSCRIBE TO OUR MOVIE CHANNELS: MOVIECLIPS: http://bit.ly/1u2yaWd ComingSoon: http://bit.ly/1DVpgtR Indie & Film Festivals: http://bit.ly/1wbkfYg Hero Central: http://bit.ly/1AMUZwv Extras: http://bit.ly/1u431fr Classic Trailers: http://bit.ly/1u43jDe Pop-Up Trailers: http://bit.ly/1z7EtZR Movie News: http://bit.ly/1C3Ncd2 Movie Games: http://bit.ly/1ygDV13 Fandango: http://bit.ly/1Bl79ye Fandango FrontRunners: http://bit.ly/1CggQfC HIT US UP: Facebook: http://on.fb.me/1y8M8ax Twitter: http://bit.ly/1ghOWmt Pinterest: http://bit.ly/14wL9De Tumblr: http://bit.ly/1vUwhH72012-10-21T22:00:12.000Z

Tracy said in a 2014 interview that the most common line that fans say to her is from, “A League of Their Own,” Tom Hanks’ famous, “There’s no crying in baseball!” Tracy said people say it to her at amusement parks. When asked about the ending of the movie and if Geena Davis’ character purposely dropped the ball to allow her sister the glory, Tracy said, “Seriously? Whatever you believe, you make true.”

3. Tracy Is Married With 5 Children

A Family Surprise for Penny Marshall | The Rosie Show | Oprah Winfrey NetworkBen is a budding fashion designer at the ripe age of…11 years old! He talks about his admiration for RuPaul, his love of design and how it feels to get bullied at school for being different. For more on #TheRosieShow, visit Oprah.com. Find OWN on TV at http://www.oprah.com/FindOWN #OWNTV #TheRosieShow #RosieODonnell SUBSCRIBE: http://bit.ly/1vqD1PN Download the Watch OWN App: http://bit.ly/2hr1nX2 About OWN: Oprah Winfrey Network is the first and only network named for, and inspired by, a single iconic leader. Oprah Winfrey's heart and creative instincts inform the brand — and the magnetism of the channel. Winfrey provides leadership in programming and attracts superstar talent to join her in primetime, building a global community of like-minded viewers and leading that community to connect on social media and beyond. OWN is a singular destination on cable. Depth with edge. Heart. Star power. Connection. And endless possibilities. Discover OWN TV: Find OWN on you TV!: http://bit.ly/1wJ0ugI Our Fantastic Lineup: http://bit.ly/1qMi2jE Connect with OWN Online: Visit the OWN WEBSITE: http://bit.ly/1qMi2jE Like OWN on FACEBOOK: http://on.fb.me/1AXYujp Follow OWN on TWITTER: http://bit.ly/1sJin8Y Follow OWN on INSTAGRAM: http://bit.ly/LnqzMz Follow OWN on PINTEREST: http://bit.ly/2dvfPeN A Family Surprise for Penny Marshall | The Rosie Show | Oprah Winfrey Network http://www.youtube.com/user/OWN2012-01-03T18:40:35.000Z

Tracy is married to Matthew Theodore Conlan. The couple has two children together. Tracy has a son, Spencer, from a previous relationship. Her husband has two children from a previous relationship. Marshall said of Spencer in her 2012 Newsweek interview, “I love him dearly.” Marshall added that Tracy has two daughters, Bella and Viva. In 2011, Bella appeared in the movie “Boys With Eyes.” An online profile of Tracy says that the family has 12 pets.

At one point in her youth, Tracy said that she was romantically linked to one of Francis Ford Coppola’s sons.

4. On Her Facebook Page, Tracy Says She Was Her Mother’s Manager

Tracy says on her Facebook page that she had been working as her mother’s manager. While on her LinkedIn page, Tracy says that she sits on numerous non-profits boards in Hollywood. Since August 2018, Tracy has been the president of the Womens Club of Hollywood. She describes her role as, “Restoring and re establishing a historic and valuable organization to its original grandeur.”

Tracy studied dance and theater at Bennington College in the 1980s and Film Studies at the University of Southern California in the 1990s. In one bio, Tracy is quoted as saying, “It was complete culture shock. I was forever try to build bridges between both of those worlds and schooling became the easiest place. I went to a lot of schools: Private, alternative, college and universities.” In addition, Tracy is the CEO of Manifesto Films.

Splat From The Past #18- Tracy ReinerTommy "Throwback" Kovac chats it up with Tracy Reiner, the lovely daughter of Penny Marshall, stepdaughter of Rob Reiner and niece of Garry Marshall. We discuss the 25th Anniversary of "A League of Their Own", as well as her multi-talented family. Totally radical!.2017-07-30T22:21:11.000Z

Tracy said in a 2014 interview with Jeff Pearlman that 15 members of her family were employed by the Atomic Energy Commission. Tracy spoke about her interest in renewable energy saying, “There is a tremendous effort being made to save the earth and a tremendous effort at still raping the earth. She will have to reconcile this battle. I am on the side of the white blood cells fighting the disease.” Tracy said in a 2011 interview with the Hollywood Sentinel, “My family in New Mexico all worked at the government facilities; Los Alamos, Sandia National Labs, Kurtland Air Force Base.”

Read More
5 Fast Facts, Breaking News, Celebrities
Tracy Reiner, the only child of Rob Reiner and Penny Marshall, is an actress in her own right having appeared in "A League of Their Own" and "Big."