ABC/Jeff Neira Pictured: Bebe Rexha at the 2018 VS Fashion Show

The 2018 Victoria’s Secret Fashion Show airs tonight and this year, the event took place in New York City, after being held overseas for a few years. The show was taped one month ago, in November, and now fans can finally watch it on TV. Get the rundown on what time the show airs, when it was taped, what channel to watch, who is performing and more information on the event below.

HOW TO WATCH VS FASHION SHOW 2018 ONLINE: The 2018 Victoria’s Secret Fashion Show is available for viewers who do not have cable. Find here several options for live streaming the show as it airs tonight.

VICTORIA’S SECRET FASHION SHOW 2018 FANTASY BRA: Angel Elsa Hosk got the privilege of wearing the Victoria’s Secret Fantasy Bra this year. This year’s edition of the bra is The Dream Angels Fantasy Bra and it is worth $1,000,000. It is designed by Swarovski.

VS FASHION SHOW 2018 SCHEDULE: There are seven segments as part of this year’s show. Segment 1 is titled Glam Royale and Leela James will be performing “This is Me” in the background. The second segment is called Golden Angel. The Chainsmokers and Kelsea Ballerini are performing “This Feeling” during the segment. Before segment 3 is a special segment as a “Thank You” to Adriana Lima, who has decided to retire after this show. Segment 3 is called Flights of Fancy and Halsey will perform “Without Me”, while segment 4 is titled PINK. This segment will feature Bebe Rexha singing “I’m a Mess”. The fifth segment is titled Heritage and for this part of the show, Shawn Mendes will sing “Lost in Japan”. Segment 6 is titled Downtown Angel, while Rita Ora performs “Let You Love Me”. “Celestial Angel” is the title of segment number 7, while The Struts perform the song “Body Talks”. 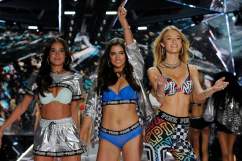