Getty Cardi B and husband Offset have split up, and social media users have had mixed reactions to the news.

After a flurry of speculation as to whether Cardi B and Offset broke up to drum up publicity for their music, the former took to Instagram Live to set the record straight. In the video, Cardi assured fans that the split is real and that she has no plans to patch things up anytime soon.

“We fell in love with each other,” she explains in the video. “Things was not always gravy ‘cuse at the end of the day we are two different people. But we never did anything for f*cking publicity b*tch you think I got pregnant, could’ve ruined my f*cking career for publicity? Y’all dumba*ses y’all must be ten years old.” Watch the full video below.

Cardi went on to discuss the fact that she would do it all over again if given a chance. “A lot of people are saying I moved too fast, maybe I did maybe I didn’t, I don’t know,” she admitted. “But, you know, sh*t happens. People fall in love, people get married, people have kids. I don’t regret anything ‘cuse at the end of the day I have my daughter and she’s beautiful, gorgeous, funny, I love her. It’s the best thing, I learned a lot.”

Cardi also goes on to credit Offset with helping elevate her music career, and teach her aspects of the industry. “I ain’t really know much from the music industry, and you know, my husband helped me, he made me wiser, he let me open my eyes to a lot of things,” she said. “And even though we not together anymore I learned a lot.”

Cardi’s Instagram message comes on the heels of Offset’s revealing tweet. The Migos rapper wrote: “Fuck y’all I Miss Cardi” on Sunday morning, causing many to speculate whether the couple might possibly get back together. 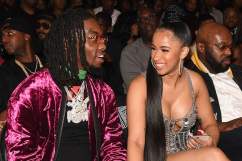 Offset Tweets Out That He ‘Misses’ Cardi B After Split

Read More
Cardi B, Instagram
The rapper assures fans that the split is not meant to boost record sales.