Lil Pump ran into some legal trouble on Tuesday when he was apprehended by Denmark police. According to TMZ, one of the members of Pump’s crew was holding something illegal, causing the rapper to pull out his phone and begin live streaming the encounter. During the minute long video, you can see Pump, born Gazzy Garcia, mocking the Copenhagen police, and at one point, flipping the middle finger behind an officer’s back.

TMZ adds that the police decided to detain Pump and his team even longer after they discovered he was recording on his phone. The rapper’s Tuesday night concert, which was set to be in Finland, was subsequently cancelled. The Live Nation website for the show says the cancellation was due to “unexpected events.” Watch the full video below.

The “Gucci Gang” rapper is expected to be released in the next 24 hours, and has not yet been hit with any criminal charges. It is currently unclear whether the arrest will impact Pump’s rap sheet, or his future tour dates. He was already forced to cancel his Harvard Dropout tour at the start of October, when legal issues kept him from honoring the set dates.

“Due to unforeseen circumstances, Lil Pump’s ‘Harverd Dropout Tour’ has been canceled,” a representative for Lil Pump said in a statement. “Refunds will be provided at point of purchase. We apologize for any inconvenience.” According to XXL, the rapper stands to lose an estimated $1 million due to the cancellation.

This encounter comes less than three months after Pump was arrested in Miami for providing false information about his driver’s license. TMZ reports that the police pulled Pump over after discovering the license plate on his Rolls-Royce actually belonged to a Mini Cooper. When cops asked Pump for a driver’s license, he allegedly told them he’d never had one. He was released soon after and issued a ticket.

This isn’t the first time that Pump has faced legal issues during his current tour. On November 16, the rapper was performing at the Rock City concert venue the concert was reportedly derailed by reports of a “smoke bomb.” According to TMZ, tear gas filled the venue and caused the show to be called off, which caused at least two minor injuries. There have been no reports of serious injuries, despite paramedics being called to the scene.

It remains unclear who launched the attack, but law enforcement are confident that the incident was not terrorism. After the venue was cleared out, however, Pump continued to entertain his fans with an impromptu performance atop his tour bus, where he performed his hit single “I Love It.” 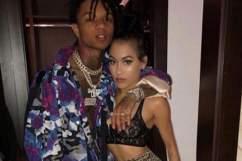