Annie Reardon will be one of 30 bachelorettes competing for Colton Underwood’s heart when The Bachelor returns tonight at 8PM ET on NBC. Reardon, 23, is a financial advisor hailing from New York, and she has been critical of her fellow cast members ahead of the season premiere.

Reardon graduated from the University of Alabama in 2017 with a B.S. in Commerce, Business Administration, Finance, and Economics. She currently works as an advisor for Bloomingdales. Reardon was one of three women to meet Underwood on The Ellen DeGeneres Show before his season premiere.

everything happens for a reason, and God always has a plan ❥ it’s official! jan 7th for the next season of ABC’s The Bachelor! #thebachelor #bachelorabc #theellenshow #samenightasthenatty #rolltide #7dogs

During the TV appearance, she bonded with Underwood over her love of puppies, and said that her mom owns a horse farm in Wisconsin. According to the Inquisitr, many felt that Reardon’s chemistry with Underwood suggested that she would go far in the competition. Nevertheless, it was spoiled that Reardon was eliminated from the series early on via her Snapchat. TV reporter @RealitySteve posted a screenshot of Reardon’s message along with the caption:

Remember Annie Reardon? Cute blonde who “won” when her, Sydney, & Katie got to meet Colton early on Ellen & every1 assumed she’d go far? She’s been home a week now & even had these choice words about Colton & the women. Oh social media can really come back to bite you.

In the Snapchat photo, Reardon bashed Underwood and some of the other women in the cast for being weird. She wrote: “When you dumped the bachelor because he’s weird as sh*t and are headed back to normal happy life without psycho people >>>.”

@RealitySteve speculated as to the nature of Reardon’s role in the series on a blog post. “Sounds like Annie is going to be an early season villain which, if I’m being honest, was stuff I was hearing about her heading into the show,” he wrote. “So I guess this shouldn’t be a surprise.” 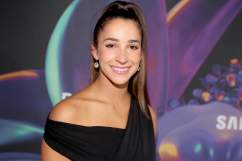 Read More
The Bachelor
Learn about one of the new contestants on 'The Bachelor.'