Ashley Martson of 90 Day Fiance has been battling lupus and recently has had a flare up, which landed her in the hospital. TMZ has just reported that Martson is currently hospitalized for kidney failure. She was rushed to the hospital after being found unresponsive.

I’m sorry if this photo offends anyone but I will not hide that I’m sick. If I can help one person with lupus then posting this is worth it. I was found unresponsive this morning at my home. The Ambulance took me to the hospital where it was found that I am in acute kidney failure due to lupus. I will begin dialysis shortly. I will not let this beat me. I know I’m strong enough to battle through this, not just for myself but for my kids. I will be transferred to another hospital this evening that is better equipped. Please pray for myself and my family as I know it’s going to be a very tough road ahead for all of us. Thank you for your continuous support and prayers #ashley #lupus #kidneyfailure #90dayfiance #tlc. **please keep negative comments off this post. I’m already scared and I don’t need to be kicked while I’m already down.

Was going through hell the entire rest of the season dealing with this. Just wanted to address this since I received many messages about this. #lupus #lupusproblems #tlc #90dayfiance haha it says complexity!? Thanks auto correct. Oh well ??‍♀️

In December 2018, Martson was hospitalized with complications from her Lupus illness, according to Us Weekly.

One of Martson’s 90 Day Fiance co-stars expressed their support for Martson shortly after Martson’s kidney failure reveal. 90 Day Fiance star Kalani’s sister, Kolini, commented on the post, writing, “I’ll be on a flight this week if you need me. You’re the strongest person ever and I love you.”

Martson has two kids from previous relationships and is currently married to fellow 90 Day Fiance star Jay Smith, though they reportedly are not still together. The two are said to have split around the holidays.

Martson and Smith got married on 90 Day Fiance this season, in Las Vegas, Nevada. They had canceled their actual wedding because of racial threats against them online. Days after tying the knot, Smith signed up for the Tinder dating app and engaged in contact with other women. Martson caught him and let 90 Day Fiance viewers in on Smith’s stepping outside of the marriage. Smith maintained that nothing happened with anyone else and that he only created the account because he was bored.

The couple was clearly on the rocks during the tell-all episode for the season. Martson appeared to be done with the relationship and said that she couldn’t trust Smith.

This isn’t the first time that Martson has been cheated on, according to her. Martson was engaged prior to meeting Smith. She had two children with two different men, who she claimed had each cheated on her, which is why she ended her relationships with them. 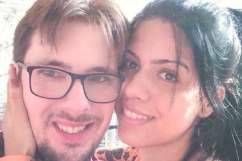