Getty The Bachelor mansion was in the direct path of the deadly Woolsey Fire that ravaged Los Angeles in November, 2018. The mansion suffered fire damage, but remains standing.

With the season premiere of The Bachelor right around the corner, fans have been questioning the fate of the Bachelor mansion in wake of the deadly Woolsey fires that devastated California in November.

On November 9, Marshall Haraden, who owns the famed Bachelor mansion in Agoura Hills, California, confirmed that the mansion had caught fire as the Woolsey Fire swept through Los Angeles and Ventura Counties. Due to road restrictions, Haraden wasn’t able to access his property until the following Monday on November 12 to asses the damage. He told US Weekly that part of the property was damaged, but the mansion itself was intact.

According to @USWeekly, most of the Bachelor Mansion has NOT burned down! For more deats, visit our IG @ brosbeforeroseofficial

Thank you to all the first responders and courageous heroes of the #Californiafires.
To donate to relief efforts, click here: https://t.co/DpTkKKf99r pic.twitter.com/5AspKaf2Sr

“The main house is there. Everything’s fine and the accessory building up front that they use for the shows as a basecamp, it was destroyed,” Haraden told US Weekly. “It’s gone, but it’s not something that’s do-or-die for the show that [production] relies on. There’s a lot of times that they’ve used it for something else and they didn’t use it for basecamp, so it’s a versatile are for them. They can makeshift. With the building gone, they can put some modular trailers there for the duration of the show and it’ll be just fine. But we’ve already talked and it’s not going to interrupt the show. The damage up around the house is minimal, which we’ll get back to shape real quick with our crew.”

Prior to the property catching fire, ABC reality executive Robert Mills had taken to Twitter to send his thoughts to the people of Malibu in the fire’s path and to note that the mansion was in “grave danger.”

Thinking of the people of Malibu and yes #TheBachelor Mansion is in grave danger as well. https://t.co/HzTAWgqU6x

The Woolsey Fire swept through the historic Western Town at Paramount Ranch, destroying a large portion of the property in its wake. The Ranch was the location of many Hollywood productions over the years, such as M*A*S*H and Dr. Quinn, Medicine Woman, and contained some of the current sets for HBO’s Westworld.

Evan Rachael Wood, who stars on HBO’s Westworld, wrote on Twitter how “eerie” it was to see the historic ranch burned to the ground. “This is eerie. So sad for the history lost. Amazed the church is still standing.”

Many celebrities lost their homes as the deadly fires decimated the state, including Miley Cyrus, Gerard Butler and many more. 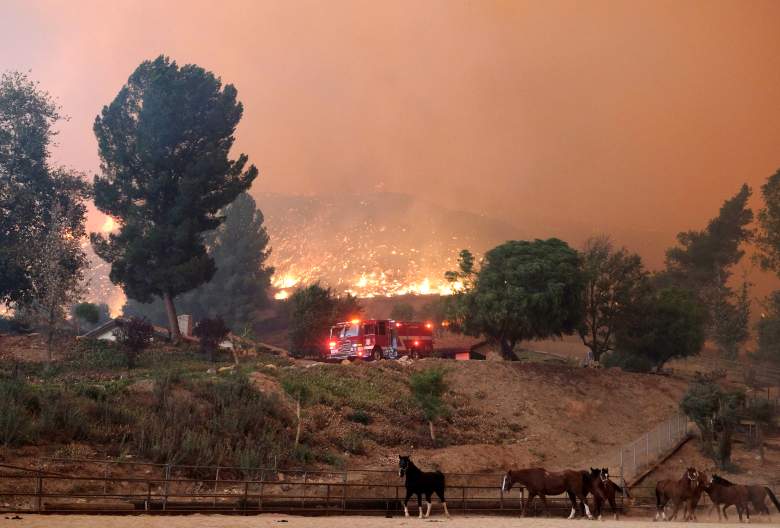 The producers of The Bachelor released this statement, before they knew if the home was still standing or not: “The Bachelor Mansion is a private home in one of the current burn areas of Los Angeles. The area has been closed to traffic so we do not know the current status of the home. It is primarily a private residence, and our main concern is with the family who has been displaced, their neighbors, and all the communities impacted by this tragic fire. We thank the tireless efforts of the first responders here in Los Angeles County and across the State.”

Haraden and his family reside in the estate 10 months out of the year when the ABC dating series isn’t filming. According to US Weekly, Colton Underwood and his contestants were traveling abroad when the mansion was set ablaze, so luckily nobody was injured.

The house from ABC’s “The Bachelor” survived the fire unscathed. House next door burned to the ground #BachelorInParadise #BachelorNation pic.twitter.com/VR9cvDBAh6

According to real estate listing service Zillow, the so-called “Bachelor mansion” boasts six bedrooms and nine bathrooms on a 10-acre property in the Santa Monica Mountains. A Zillow estimate pegged the home’s value at just above $3.9 million.

READ NEXT: Does Colton Lose His Virginity This Season?

Read More
Celebrities, Reality TV, The Bachelor
The Bachelor mansion was in the direct path of the deadly Woolsey Fire that ravaged Los Angeles in November, 2018. The mansion suffered fire damage, but remains standing.