The reality series Growing Up Hip Hop returns tonight on WE tv. Among the many subplots that the cast will have to deal with, one of the most notable is the ongoing beef between Damon “Boogie” Dash and his rap mogul dad Dame Dash. The father and son duo have bumped heads over Boogie’s alcohol addiction, with the elder Dash going as far as to stage an intervention on the show last season.

During a season 4 promo, Boogie revealed that he hasn’t spoken to his dad since he’s been to rehab. “Right now, I just feel like he’s trying to expose me for something that I’m not,” he told Lil Eazy-E. “So I’m just not really appreciating that at all. I’m not talking to [him] at all just cuse he’s trying to make me look bad.”

Been missing that west coast weather… it’s about that time to go back⛱? #FAXXX #TheLife

Boogie added that while he appreciates the steps that Dash has taken to help remedy his addiction, he feels like he could have gone about it in a less public way. “I could see if he did all this off camera, but now he’s doing it on camera, trying to make himself look good and me look bad,” he said. “That’s just the honest truth.” Boogie also said that his dad was “a trigger for me.”

Dash tried to confront Boogie’s addiction to both alcohol and lean during season three. “The real consequence is he can’t do the show no more,” he told a specialist during one episode. “For right now, all he listens to is bread. He can’t buy drugs without no money and this is how he makes his money.” While initially apprehensive towards the fact that he has an issue, Boogie admitted that when he does drugs he does “too much of it at one time” and agreed to enter rehab.

Elsewhere during season three, Dash accused fellow rap parent Pepa of enabling his son’s addiction. “So, when I handed him a drink at my party last time that spiraled him out?” Pepa asked. “He was never the same since then,” Dash said, “If he doesn’t go to rehab, y’all not seeing him no more. I’m not gonna help put money in his pocket to buy drugs because kids are dying out here, it’s not just liquor.”

Boogie spoke on the last time he talked to Dash during a season four teaser. “The last time I saw my dad… I’m not gonna lie I had some drugs in the house,” he said. “I don’t know how this is gonna play out.” Dash shared his two cents with Boogie after the incident was caught on camera. “You’re really worrying me,” he said. “Bringing that into the house must mean you got a real problem. ” 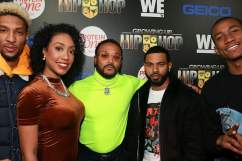