The Church of Scientology’s headquarters is known as “Int Base” to Scientologists and often referred to as “Gold Base” because it holds the Golden Era Productions studios.

A few years ago, an anonymous person flew a drone over Gold Base and captured a slew of pictures and video of the secretive headquarters using a 4K camera mounted on the drone. The anonymous source originally sent the footage to the Underground Bunker, a site operated by journalist Tony Ortega, who has covered Scientology since 1995. You can check out some of the footage in the YouTube video below:

The footage shows several important buildings, including the offices of the Religious Technology Center and its chairman, Scientology leader David Miscavige, the “hole” where the group allegedly holds several high ranking Scientology officials who have been confined to the building as punishment for months and years on end, and a special gym that was constructed for use of Miscavige and his close friend and fellow Scientologist, actor Tom Cruise.

For those who don’t know, the secretive religion is based on the works of science fiction author L. Ron Hubbard. Scientologists believe that “thetans” cling to human souls and are the cause of psychological issues. They say that thetans were spread over the universe in the fallout of an intergalactic war caused by an alien dictator named Xenu.

As chairman of the the board, Miscavige ensures that church practices hold true to the original “technology” set out by Hubbard, whom Miscavige worked closely with in the early years of the church. Miscavige joined the church when he was still a teenager, dropped out of high school to pursue his teachings, and took over as leader after Hubbard passed away.

Scientology Gold Base DJI Phantom 4 Flight 2Tony Ortega's Underground Bunker blog post about the video: tonyortega.org/2016/09/07/scientologys-secret-sites-the-bunker-premieres-drone-footage-never-before-seen-of-int-base/ This is the second drone flight over the Scientology Gold Base near Hemet California. It is part of a series covering all of the major Scientology bases in the Western USA. This video was created for use in documentaries and may be used by anyone…2016-09-07T14:22:59.000Z

Gold Base is one of the largest and most secretive Scientology compounds in the world, and is essentially the religion’s headquarters. The church and its members have publicly identified the location as belonging to the religious organization, according to Business Insider. It’s protected by a sturdy fence and microphones to detect intruders.

Ortega published an in-depth examination of the footage with the help of former Scientologists, which you can read in full here. Ortega sent screenshots from the videos to Tom DeVocht — a man who worked at the base for several years before leaving the church in 2005. DeVocht gave a detailed breakdown of many of the buildings shown in the footage, including a large set of what looks like apartment buildings that DeVocht claims were built to lock away dissident members. 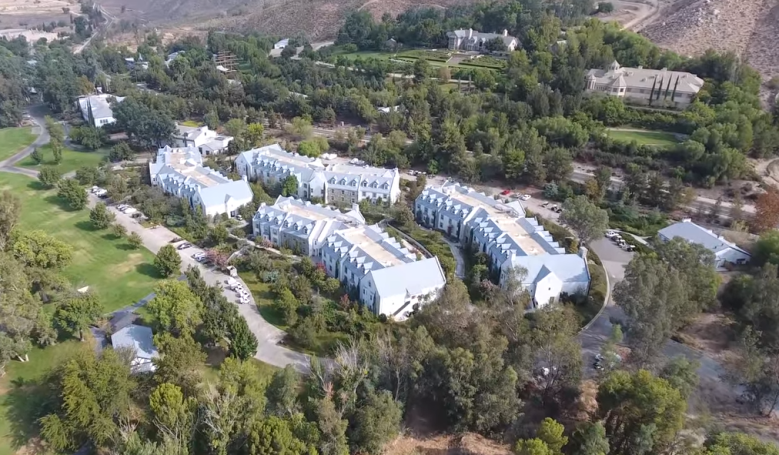 Screenshot of Video – Tony Ortega’s “Underground Bunker”“Berthing” – buildings constructed on the Gold Base, allegedly used to lock away disruptive members.

The drone footage covers the vast majority of the more important buildings on the compound, including Building 50 — Miscavige’s offices and the building that houses “elaborate rooms dedicated to Miscavige’s use,” according to the Underground Bunker.

DeVocht says that on the far side of Building 50, you can see a long, rectangular building, which is a garage for Miscavige’s automobiles. And to the right, out of the picture, there’s a power plant that was built to make sure that Int Base/Gold Base has its own electricity supply. DeVocht told Ortega that Miscavige complained that “noise from the power plant would be heard from his offices, so they had to make sure that it was far enough away, and that Building 50 was built like a tank, so the noise wouldn’t bother him.” 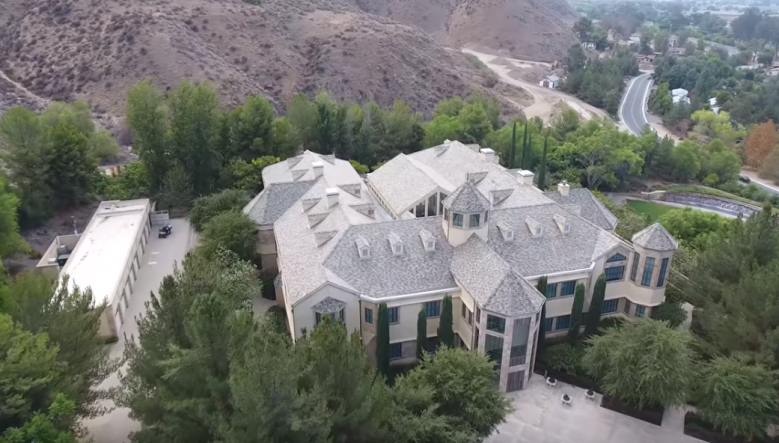 Screenshot of Video – Tony Ortega’s “Underground Bunker”Miscavige’s office quarters, called ‘Building 50’ also features several rooms dedicated to Miscavige’s use, and the rectangular building on the left houses his many vehicles.

The photo below is the rebuilt version of Bonnie View — a Scottish-themed residence that was already constructed when the church bought the property, which had been a resort known as Gilman Hot Springs. According to Underground Bunker, Hubbard liked the Bonnie View house and intended to live in it when he was visiting the base and no longer in hiding, but Miscavige had the house torn down and replaced with this much larger version.

When we asked what was in the building today, DeVocht says the place is filled with items from Hubbard’s life.

“There are maybe just a couple of staff members in Bonnie View now. It has all of LRH’s artifacts. His Boy Scout stuff. It’s supposed to be a museum, and there was talk that maybe someday it would be open to the public.” He told Ortega that construction of the house was rushed and poorly built. “That place was built as badly as Building 50. In a major quake, that building will come down.”

A screenshot of the newer, larger version of Bonnie View that Miscavige had built.

In the screenshot below, the two square buildings with flat white roofs house “The Hole,” the prison that Miscavige allegedly locked away up to 80 people for several months, and sometimes years, at a time, according to DeVocht. DeVocht says the prisoners in the Hole would be marched through a tunnel under the highway each morning to a building where they could shower.

The Tampa Bay Times, previously the St. Petersburg Times, described The Hole in a January 2013 article as:

A place of confinement and humiliation where Scientology’s management culture — always demanding — grew extreme. Inside, a who’s who of Scientology leadership went at each other with brutal tongue lashings, and even hands and fists. They intimidated each other into crawling on their knees and standing in trash cans and confessing to things they hadn’t done. They lived in degrading conditions, eating and sleeping in cramped spaces designed for office use.

Miscavige was also accused of holding his own wife against her will, possibly in The Hole, back in 2006. Actress Leah Remini filed a missing persons report for Michele Diane “Shelly” Miscavige, Miscavige’s wife who reportedly hadn’t been seen in public for six years. 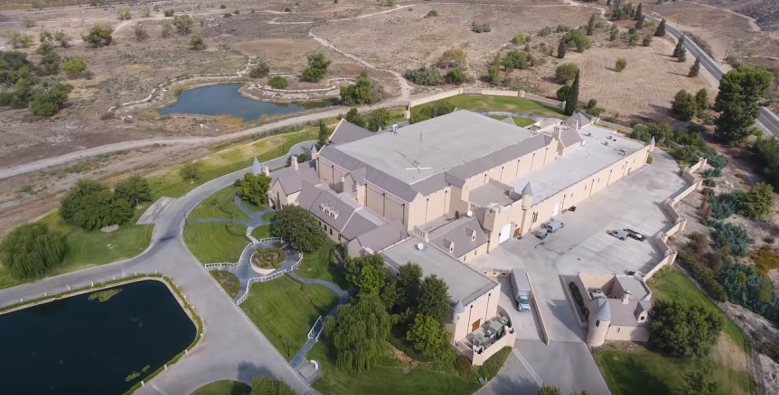 Another glimpse of the compound from the drone shows us a good view of the “Cine Castle” — the huge studios used by Golden Era Productions, which can be viewed above. According to DeVocht, the tiny pond outside of the compound used to be a much larger lake, but after millions of gallons of water were used over several years to water the grass, the pond is nearly completely empty.

To see and read more about the different sections of Gold Base, click here to read Ortega’s full description and breakdown of the drone footage.

READ NEXT: David Miscavige: 5 Fast Facts You Need to Know

Read More
Celebrities, Scientology
The Church of Scientology's headquarters is known as "Int Base" to Scientologists and often referred to as "Gold Base." Check out pictures of the property here.