Gunplay and Keyara were two of the breakout stars of Love & Hip Hop: Miami during its first season. Now that the series is returning for its second season tonight, fans may have some questions about their relationship and some of the difficult experiences they’ve had to go through since they were last on the air.

Read on to learn about Gunplay and Keyana’s relationship, and how the Love & Hip Hop: Miami teaser, which shows the rapper claiming that cast member Amara La Negra is sliding into his DMs, will factor into the upcoming season.

1. Both Gunplay and Keyara’s Careers Took Off After They Were Cast On ‘Love & Hip Hop: Miami’ Season 1

While Gunplay and Keyara were already dating by the time they were cast on the first season of Love & Hip Hop: Miami, their chemistry onscreen quickly boosted their careers. Gunplay, born Richard Morales, Jr., is a rapper who is signed to Rick Ross’ Maybach Music Group and who blew up when he appeared on the 2011 track “Cartoons & Cereal” alongside Kendrick Lamar.

He released his debut solo album Living Legend in 2015, which peaked at number eleven on the US Top Rap Albums. Gunplay is also a member of the group Triple C’s with rappers Torch and Young Breed. They released their debut album Custom Cars & Cycles in 2009, which included features from Lil Wayne, Birdman, Young Jeezy, and the aforementioned Ross.

Keyara, born Keyara Stone, is a popular Instagram presence with over one million followers. During an interview with In Touch Weekly, she broke down her process for selecting the right photos to post. “I take 150 pictures until I get the that one,” she revealed. “So you won’t see a picture from me for like six weeks because I’m that picky about what I post.”

2. Gunplay Admitted to Using Coke & Keyara Forced Him to Quit Or She Would Leave Him

Love & Hip Hop: Miami fans was shocked when Keyara found a $100 bill laced with cocaine in Gunplay’s pocket. In the seventh episode, she paid a visit to the set of his music video for “Stove Still Hot” and was visibly upset by the fact that the rapper appeared to be high. Keyara threatens to break up with him before leaving the set.

During an interview with Hot 97, Gunplay recounted the situation. “Keyara came in there checking me about some coke and sh*t,” he said. “It was in a $100 bill and it fell out of my pants. she found it, came to the video shoot, you know, tripping on this, and on that. Embarrassing a n**ga. I was like… man… Then she gave me an ultimatum: “You ain’t the only d**k on earth…”

Gunplay, who released a song titled “Cocaine” in 2013, went on to discuss the specifics of his drug use. “I was f**king around with a little blookah. I relapsed a little bit,” he admitted. “In the privacy of my home… yeah, you know what I’m saying? I’ve done some here and there, but I haven’t been f**king around in a while. That was some old sh*t that had resurfaced. Keyara doesn’t want me to do it because it changes my attitude and I’d be tripping. I don’t sleep and I work too much when I be on it.”

In a separate Vice interview, Gunplay spoke on his drug use and the fact that he also wants to stay clean for his son, Richard Morales III. “Once you know you’ve got a mouth to feed and someone to take care of who is depending on you, you go a little harder to try and get the money,” he explained. “Sometimes you do the wrong things to get it. I’ve been trying to balance my career, get the money, and not go to jail in the meantime.” Gunplay divorced his son’s mother in 2008.

3. Keyara Was Shot Three Times by Crossfire In 2016 & Said It Affected Her Daily Relationships

During an interview with DJ Smallz, Keyara revealed that she had been shot three times by crossfire in Chicago in 2016. She detailed how a bullet went through her arm, entered her chest and exited through her breasts. She was also shot in the ankle and foot.

“Being shot is definitely not a good feeling. I would say it burns,” she told DJ Smallz. “And when you’re shot, you don’t… The adrenaline is pumping through you, you don’t even realize you’ve gotten shot until you actually sit down, you calm down, you see everybody in your face… And then you realize that you’ve f***in’ got shot.”

Keyara admitted that the shooting and her subsequent injuries have affected how she interacts with those around her; namely Gunplay. “It kind of complicated things,” she admitted. “It hit some things inside of me that I wouldn’t know about, where I can’t even talk for a long period. I can’t raise my voice. I get short of breath.”

“I never knew how it felt to go into a grocery store and pick something up, and not need a wheelchair or crutches,” she added. “So I feel like the shock didn’t hit me until I wanted to do normal things.” Check out the full interview above.

4. Gunplay Was Sued for Head-butting His Ex While He Was With Keyara At a Nightclub

Gunplay and Keyara were dragged into a legal battle when the former was accused of attacking his ex-girlfriend Aneka Johnston. Johnston, who says she dated Gunplay from 2010 to 2012, says that he and Keyara approached her at a nightclub and attacked her after provoking an argument over old relationship issues. During the fight, Johnston says that Gunplay head-butted her and caused injuries to her head, face and eyes. She pressed charges of misdemeanor battery.

Johnston’s attorney, released a statement that said: “Gunplay has a long history of committing violence and domestic abuse. He has made a living out of glorifying crime and harmful conduct on people, including women. Ms. Johnston was working and didn’t deserve to be attacked. She has previously been a victim of Gunplay’s domestic violence and ended her relationship with him years ago because of his ongoing abuse.”

The statement, obtained by Bossip, added: “Gunplay’s celebrity status does not allow him to act above the law. No amount of fame or fortune justifies Gunplay’s shameful and outrageous conduct. This lawsuit will send Gunplay a message and deter his misbehavior in the future. We will seek punitive damages against him as allowed by Florida law.” The case has yet to reach a conclusion.

5. Both Gunplay & Keyara Have Flirted With Other ‘Love & Hip Hop: Miami’ Cast Members

Both Gunplay and Keyara have had romantic tension with other cast members. During the first season, Keyara was worried that Miami Tip was going to be hitting on her man, but was surprised and flattered when Tip began flirting with her instead. “I don’t want no motherf**king Gunplay… but now that I know how you look, I would’ve still got on the f**king table and had you on the table with me!”

According to Earn the Necklace, Keyara showed Miami Tip her “assets” and was flattered when Tip said “call me,” as she left. Gunplay appears to be involved in a similar situation with cast member Amara La Negra headed into season two. During a promo the rapper tells Young Hollywood that his relationship troubles with Keyara have partially be caused by women sliding into his DMs. Amara is among the women named. “You hittin’ that?”, Hollywood asks. 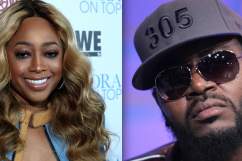