Getty The cast of 'This Is Us'

I s the midseason premiere of This Is Us airing tonight on NBC? The beloved family drama was originally set to return as part of the network’s Tuesday schedule, but President Trump’s address has caused dramatic shifts in the lineup.

According to Fansided, there will be no new episode of This Is Us tonight. The episode that was slated to air as the midseason premiere has been pushed back a week, in part due to Trump’s address and due to the fact that that NBC is doing extra promotion for the reality series Ellen’s Game of Games. This week, the Ellen series will air a new episode at 8 p.m. ET and a bonus second episode 9 p.m. ET slot that usually belongs to This Is Us.

#HappyNewYear from our #ThisIsUs family to yours! ?

Trump’s address, titled President Trump Address to the Nation and Democratic Response, will air on NBC at precisely 9:00 p.m. ET. The address is scheduled to end at 9:08 p.m. ET, but the subsequent Democratic response has not been given a definite end time. Deadline reports that NBC will join the second episode of Ellen’s Game of Games, which will be a rerun, in progress after the Democratic response. The midseason premiere of New Amsterdam will follow at 10:00 p.m. ET as was originally scheduled.

This Is Us will return next Tuesday night with an episode titled “The Last Seven Weeks.” It will focus on the conclusion to the political campaign that Randall Pearson (Sterling K. Brown) has been running throughout the season. The episode will also see Randall’s brother Kevin Pearson (Justin Hartley) meet someone from the past, and their sister Kate Pearson (Chrissy Metz) will continue to prepare for the arrival of her first child.

The Episode ‘The Last Seven Weeks’ Will Premiere Next Week In Its Normal 9 P.M ET Time Slot

Do you think Randall’s doing a good thing? Do you think he’ll be able to continue to campaign? @nbcthisisus @susankelechiwatson @sterlingkbrown

The episode will come after a dramatic mid-season finale involving the Pearson family and their uncle Nicky (Michael Angarano), whom they believed had died during the Vietnam War but is actually still alive. “We loved that Kevin was going to Vietnam in search of one thing — his father’s war story and his father’s relationship with the woman wearing the necklace in the photos — and he ends up answering a question he didn’t even know he should be asking, which speaks to the unexpected nature of life,” explained one of the show’s creative forces, Isaac Aptaker.

Aptaker and Berger also spoke to Variety about the ways in which the lives of the three main characters are growing more intense than ever. “Randall hasn’t really considered how much it’s going to affect his family and the sacrifices he’s going to have to make as a husband and a father for this all-consuming campaign, a two-hour drive from his house,” Aptaker said of Randall’s political aspirations. “We’re starting to see the cracks in a really scary way by the end of this midseason finale already.”

“They’re definitely going to be tested,” Berger added. “Their girls — at least two of them — are at an age where things are only going to get more complicated, Randall is only going to get busier whether it’s politics or something else, Beth has to figure out what she wants to do. There’s a lot going on in that household, so it’s going to be a pressure cooker.” 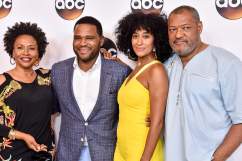 Is ‘Black-ish’ on TV Tonight? Presidential Address to Delay Episode

Read More
NBC, This Is Us
Find out whether the presidential address will change the time slot for the family drama.