The story of Jazz Jennings’ gender transformation will continue with the fifth season of the reality show, I Am Jazz. The show will return to TLC tonight at 10/9 c, and see Jennings take the final steps in her transition journey.

As such, many viewers may be curious as to Jennings’ past and background. We’ve assembled photos of Jennings, born, as a young boy along with interview clips that delve into her childhood and when she determined that she was transgender.

So many people attempt to cloud the purity of this child's happiness with their tenacious hatred. Her eyes glisten with hope, yet they are still denied by the intolerance of society. Her heart beats with the gratifying rhythm of freedom yet so many others prefer the trepidatious sound of fear or the unrelenting drum of cruelty. But the hope in her eyes and the love in her heart are confident that one day everyone will be able to hear that alluring melody of freedom if we can all just wish for one another to smile in the way of that little girl?

Jennings revealed that she was aware of her true identity from a very young age.

“From the time I was six years old, I’ve been sharing my story,” she told ABC. “And you know at first I thought, ‘Okay, this is all going to come to an end one day and then I’ll be able to live my life.’ But more and more I realized that I was given this platform for a reason and that I have a strong and powerful voice.”

“I think for me, I’ve always been so honest about who I am as a person,” she added. “And being transgender, I feel like it’s something that I couldn’t hide no matter what. Don’t have to explain myself or the fact that I’m transgender to people who haven’t met me before. So it’s kind of– I like that about being public.”

Jennings, also told ABC that her parents were supportive in allowing her to pursue her dream.

Her parents decided to medically intervene with hormone blockers when she was 11 years old, which any male development. By the time she entered high school, she was taking the female hormone estrogen.

Jennings explained that she it was a crucial step towards becoming the person she wanted to be.

Happy Father's Day DAD! You have been there for me since the very beginning? I love you!

“I have no regrets because it allowed me to prevent myself from going through male puberty,” she explained. “I feel like that’s why my dysphoria hasn’t been so bad is because I look in the mirror, and I see the girl that I am on the inside. But not every transgender person has the opportunity to do that.”

Jennings also said that she felt a responsibility to share her story in the hopes that it inspire other transgender children to feel confident in their own journeys.

“I’ve been criticized for sharing too much information, and yeah, it is personal and uncomfortable for some individuals,” she admitted, “But how are we going to learn if someone doesn’t step up to the plate and share their story and personal details.” 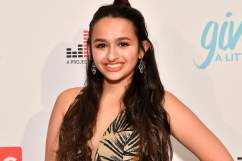 ‘I Am Jazz’ Season 5 Spoilers