As Love & Hip Hop: Miami returns for a second season, one of the biggest stories is the falling out between cast members Trina and Trick Daddy. The longtime collaborators appear to be at each other’s throat in the season two promos, with Trina going as far as to say: “This guy is f**king disrespectful and I’m tired of the bullsh*t!”

The promo in question also sees Trina request that Trick Daddy be kept away from her. As their rocky relationship is sure to be a talking point throughout the season, here’s everything you need to know about the veteran rappers and their past.

Trina and Trick Daddy broke out with the 1998 single “Nann N**ga.” The track peaked at number three on the U.S. Hot Rap Tracks and established both Florida artists as formidable hit makers. They would go on to release a string of popular collaborations together, including “Off the Chain Wit It” and “I Don’t Need You.” During this time, sites like Famous Fix and Who Dated Who claim that the duo were romantically involved.

According to Bossip, Trick Daddy has hinted at the fact that he and Trina hooked up several times over the years. Furthermore, Trick was among the male rappers mentioned on Trina’s 2004 single “I’m Leaving You (Big Ol’ D**k) , where she talks about bedding her peers. The track was inspired by LL Cool J’s classic “Big Ol’ Butt.”

The rumored couple had all but fallen out by the time Trina talked with the Miami New Times in 2005. When told that Trick Daddy was critical of her attempt to crossover with more accessible music, Trina explained: “I don’t know if Trick knows what it means to evolve or not, but I do. He’s street and that’s all he’s going to ever be. I came out being street, I came out being sexy, and now I’ve moved on to still being street but also being more mature and more classy. You have to grow…. You have to grow to be a superstar and not just a rap artist.”

2. Trick Daddy Was Married to Trina’s Cousin Joy Young But They No Longer Live Together

Trick Daddy was married to Joy Young, but according to Celebrity Mirror, the couple have been estranged for some time and no longer live together. Young, who is Trina’s cousin, is an entrepreneur, hair stylist, and a reality television star best known for appearing on Love & Hip Hop: Miami. In addition to her TV stardom, Young is the founder of New Roots Extensions, which a fashion brand that sells different types of fashion accessories.

The ‘About’ page on the New Roots Extensions website places being user-friendly above all else. “When you wear any of our products we want you to feel like there is nothing in this world that will stop you from being a better you,” the website states. “This is why at New Roots Extensions we take pride in empowering women and always willing to extend a helping hand in doing so. We are dedicated in providing all the tools for the ultimate diva experience. Kindly take a look around ladies and enjoy!”

Trick Daddy and Young discussed getting a divorce during the first season of Love & Hip: Miami. During one episode, the rapper voiced his frustrations at still being legally married to her. “I see Joy in the corner,” he said. “I’m tryna figure out why in the hell is she here. I ain’t holla’d at Joy in ’bout four years. But I know that’s Trina’s cousin. She keep poppin’ up every time we go somewhere. Now, when you ain’t speak to somebody in over four years, you damn sure ain’t tryna celebrate their birthday with ’em.”

3. Trick Daddy Called Trina ‘One of the Biggest H*es In the Game’ During a ‘Love & Hip Hop’ Interview

During the first season of Love & Hip Hop: Miami, Trick Daddy discussed his rocky relationship with his wife Joy, and the fact that Trina and fellow cast member Dawn were giving her advice. He complained that Trina and Dawn were the spokespeople for his wife, and went on to insult both of them.  “You got Trina and Dawn representing you?” he said. “The two biggest h*es in the game?”

This is not the first time that Trick Daddy has made controversial remarks that have gotten back to Trina. In 2017, Trina responded to a rant that Trick Daddy posted to his Instagram. In the post, the rapper calls out black women for being lazy, and warns that if “Spanish and white women learn to fry chicken,” than black women will become “useless. ” Trina told The Breakfast Club that his comments were inappropriate, even if they came from a good place.

“There was a good and bad part to it,” she said. “I feel like what he said wasn’t so bad. It’s a lot of women that need to get their self together,” she said about his statements. “I think his choice of words of saying ‘black women’ and using a different race of women is what made it sound crazy.”

“We’re already in this big racial war,” she added. “That was offensive to women. Me knowing him as a person — I think the choice of words was just Trick talking how Trick does, but meaning it the way everybody perceived it.”

Before starting up a romance with Trick Daddy, Trina dated Trick Daddy’s half-brother Derek Harris, also known as “Hollywood.” In an interview with VladTV, the rapper spoke on the young relationship, and the tragic way in which it ended. “I was in high school, I think I was about to graduate,” Trina said. “It was kind of like a first relationship. He was an amazing guy.”

Harris was shot and killed on June 23, 1994. He was only 23. According to the Sun Sentinel, his body was found in a 1987 Buick and a suspect was never apprehended. “It was a very, very disturbing moment,” Trina revealed. “I was really young and I just didn’t understand how someone could be so great of a person and someone could do that… He was a street guy but he was a great guy.”

Trina also recounted how she was with Hollywood shortly before his death. “He said he was gonna go by somewhere, and I was like ‘I’m going to’ and he said ‘No you’re not’,” she recalled. Trina concludes her story by saying that she got a message reading “I love you” on her pager before falling asleep, and when she woke up, the report of Hollywood’s death was on the news.

5. Trina & Trick Daddy Still Work Together & Have Been Teasing a Joint Album Since 2017

Despite their checkered past and career disagreements, Trina and Trick Daddy have been teasing the release of a joint album titled TNT. The lead single, “Smooth Sailing” was released on July 28, 2017, and included a guest verse from rapper Ali Coyote. Check out the music video above.

During an interview with Billboard, both Trina and Trick Daddy were complimentive of each other’s creative process. “I’d say it’s a little more slowed down,” Trina explained. “We’re used to things going a lot faster, but we’ve been able to make it work. We’re just trying to be in the studio more to rekindle the same kind of chemistry. It’s still the same; it’s not like two people that don’t know each other. He’s in, then I go in. It’s easy to us.”

Trick Daddy was similarly enthusiastic, adding that few female rappers match Trina in skill. “I been toting this for a long time, and the era is different now,” he said. “With Trina, [she’s] naturally pretty, slick mouth and fine as f**k. But now, the girls all think that they’re famous now. Nobody wants to work hard no more. They get a few likes on Instagram and they think they’re superstars. They will never be a Trina.” 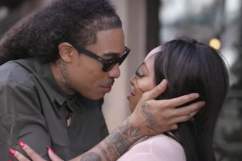