Gordon Ramsay’s 24 Hours to Hell and Back has returned to FOX with new episodes and the Trolley Stop Cafe in New Orleans, Louisiana is the first restaurant to be featured, tonight, on January 2, 2019. According to Monsters and Critics, the cafe opened in February 1995, founded be Swedish immigrants Hans Karlsson and Lucian, Keith, and Connie Cascio. Their aim was to create a menu of Southern Comfort food at a reasonable price.

In 2017, Karlsson’s son and grandson, Paul and Ragnar Karlsson, took over the cafe and hoped to maintain the integrity of it. The restaurant serves three meals a day and it previously had an extensive menu but had to cut down on some of the items in order to maintain its financial health. So, Gordon Ramsay stepped in to help.

According to NOLA eater, assisting Ramsay in his rescue of the Trolley Stop Cafe, was Aaron Sanchez, the chef and co-owner of the CBD hotspot Johnny Sanchez. Previously Chef Sanchez appeared alongside Ramsay on FOX’s Masterchef. Sanchez and Ramsay appeared at the Trolley Stop Cafe in mid-October 2018, after postings were made on the restaurant’s social media accounts that stated they were “months away from having to close our doors forever,” and that the eatery had to “take drastic measures in order to stay open.” 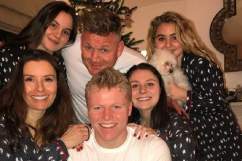 On the official Trolley Stop Cafe website, the intro to the restaurant reads, “Located on Saint Charles Avenue in the Lower Garden District, The Trolley Stop Cafe is a timeless New Orleans landmark. Our kitchen serves breakfast, lunch, and dinner classics all day long. Trolley Stop’s southern charm and hospitality attracts visitors from around the world and keeps the locals coming back. This one of a kind eatery is everything you want and more. Cozy, eclectic, delicious, and affordable… not to mention only seconds away from the historic Saint Charles Avenue streetcar line.”

Some of the breakfast items on the Trolley Stop Cafe menu include the Banana Split Waffle, the Catfish Breakfast, and the Potato and Onion Omelette. For lunch and dinner, some of the menu items are the Chicken and Sausage Gumbo, the Fried Green Tomato BLT, the Homemade Bread Pudding with Rum Sauce and the Mushroom Cheeseburger.

Crawfish and andouille frittata with a side of seasoned red potatoes. Pinch me, I must be dreaming!!! #thetrolleystopnola #nolamade #nolafood #wherenolaeats

Recent reviews about the Trolley Stop Cafe have been mostly favorable and great. One Yelp user named Tracy H. wrote, “My husband is extremely picky when it comes to eggs being cooked just right and they cooked them to perfection. Our waiter was actually the night manager William, and he was absolutely wonderful and treated us as though we were the only customers there. I cannot recommend the Trolley Stop enough.”