With HBO’s True Detective coming back for its third season, many fans are taking time to revisit the show’s previous stories. This includes the critically acclaimed first season and the second season, which was generally considered to be a weaker installment in the crime anthology.

Given the anticipation behind the upcoming season, however, which airs at 9 p.m. ET, we’ve assembled a recap of the main characters from True Detective season two, as well as the crucial plot points. Below is a recap and review of the entire second season. So of course, this article will have major spoilers from here on. It follows the interweaving stories of three police officers and a career criminal:

Raymond “Ray” Velcoro (Colin Farrell) is a detective for the Vinci Police Department. He has affiliations to the mob, and is generally untrusted by his peers. He also has a troubled personal life, as his ex-wife was raped years prior and the rapist in question may have fathered his son.

Antigone “Ani” Bezzerides (Rachel McAdams) is a sergeant for the Ventura County Sheriff’s Office Criminal Investigation Division. Emotionally remote, she struggles with personal issues regarding her family, who subjected her to the abuse of a cult when she was younger, and vices such as gambling and drinking.

Paul Woodrugh (Taylor Kitsch) is a California Highway Patrol officer and war veteran, who previously worked for a private military contractor. He has a girlfriend, but is a closeted homosexual who denies any past relationships he had with men.

Francis “Frank Semyon (Vince Vaughn) is a career criminal who attempts to legitimize his business by investing in city railroads. He and his wife Jordan (Kelly Reilly) are also trying to have a child together.

The series is notable for involving more characters than its predecessor. It starts with the murder of Vinci city manager Ben Caspere, who disappeared shortly before he was to present plans for real estate development near a high-speed rail line. His death ruins the plans of his corrupt business partner Semyon, who is forced to take illegal means to secure the deal. Velcoro is a corrupt cop who moonlights for Semyon as an enforcer, and is currently seeking custody of his son.

Meanwhile, Bezzerides is conducting a raid on alleged brothels around town, and comes to discover that her sister Athena is working as a cam girl. A third cop, Woodrugh, is put on paid leave after an actress tries to seduce him and later falsely accuses him of sexual misconduct during a speeding stop. Each of these individual narratives converge at various points throughout the season. Velcoro and Bezzerides partner up to investigate Caspare’s murder, though the mutual distrust they have for one another impairs their work.

Semyon, who was left holding the bag for Caspare’s deal, is forced to rebuild his empire by working his way back into the ownership of his former clubs. He also starts talks with the city’s drug dealers in an effort to reclaim his lost money as soon as possible. Velcoro and Bezzerides continue to trace Caspare’s movements, discovering the extent of his corrupt dealings throughout the city. They catch a huge break when Woodrugh and his partner accidentally come across a prostitute who’s selling a watch owned by Caspere.

Under pressure to close the case, Velcoro, Bezzerides and Woodrugh team up to lead a raid against the prostitute’s pimp, which turns into a massive shootout. The building they surround, which turns out to be a meth lab, explodes, and pimp engages the police in a shootout that claims many civilian and police casualties. We then jump two months ahead, in what is the season’s only lapse of time. The devastation from the shootout causes the investigation into Caspare’s death to be shut down.

Season 2 Drops the Flashback/Flashforward Structure of Its Predecessor

“I left all that behind.” #TrueDetective

Velcoro has since quit the police department and works for Semyon as private security. Bezzerides has been demoted to the sheriff’s office evidence lock-up, and Woodrugh has been promoted to detective. Eventually, Woodrugh looks into his partner’s death, and suspects that the department may be covering up details about the Caspare case. This leads hims to team up with Bezzerides, who reaches out to the burned out and disillusioned Velcoro. The trio attend an elite, secret party in Monterey, with Bezzerides going undercover, and Woodrugh and Velcoro carefully watching her from afar. The former gets out after killing a guard, while the latter pair come away from contacts that could indict several high-ranking political figures with knowing about Caspare’s death.

Faced with the realization of their impending doom, Velcoro and Bezzerides sleep together. Woodrugh, meanwhile, is lured to a meeting with a male blackmailer, who has photo evidence of an affair they had. Woodrugh overpowers him but is shot twice in the struggle and killed. After learning of Woodrugh’s death, Velcoro and Bezzerides meet with Semyon and agree to head to Venezuela after staging an attack on the parties responsible. They succeed, killing both parties, but they are ambushed. Semyon is taken out into the desert by members of the cartel that he cheated, and Velcoro is spotted by the police department and tailed through the city.

The Season Ends With Most of the Main Cast Being Killed

“Never do anything out of hunger.” #TrueDetective

Semyon pays off the cartel, but refuses to give one of the men his suit when they ask for it. He’s then stabbed and attempts to walk back to civilization before dying. He sees a handful of hallucinations in his final moments. Velcoro says goodbye to Bezzerides on the phone before drawing the police into a shootout in the woods. He’s eventually killed, and the message he tries to text his son never sends.

An epilogue shows that Velcoro is remembered as a cop killer, a new highway is named in Paul Woodrugh’s memory, and Bezzerides and Jordan have escaped to Venezuela. Bezzerides is revealed to have given birth to Velcoro’s second son. She meets with a journalist and passes all the incriminating evidence she as onto him. 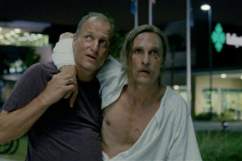