The animated series Young Justice: Outsiders is back for its third season on the DC Universe platform. The season will see the return of fan favorites like Robin, Kid Flash, Wonder Girl, and Blue Beetle.

In addition to these returning characters, Young Justice: Outsiders will be introducing brand new superheroes into the mix. Learn about these new heroes and the role they will play in the upcoming season below.

The superhero known as Forager will be coming to the new season and will be voiced by actor Jason Spisak. Spisak  also voiced Wally West on Young Justice series. “He looks very different from the Forager you know from the comics,” said producer Brandon Vietti. “He’s from a bug race in the comics and we wanted a look that [indicated that].”

“The design itself, there wasn’t a lot of back and forth with that one,” added art director Phil Bourassa. “He started out a little more monstery and we just gradually massaged him into the silhouettes and shapes that we wound up with. And he’s kind of adorable. … Our show deals with a lot of dark stuff, and it’s nice when you have a character who brings a lighter touch.”

Halo is another new character that will be introduced this season. She was an original Outsider from the comic books, and will be voiced by actress Zehra Fazal. This will be Halo’s second animated appearance, following a brief cameo in Batman: The Brave and the Bold.

According to the Young Justice Wikia, Halo can create different auras which, depending on color, have different powers. Orange equates to flight, red equates to force fields, and purple means healing.

Geo-Force is one of the most pivotal superheroes to be introduced during season three. The character, voiced by actor Troy Baker, the older brother of Terra and the crown prince of Markovia, his homeland. He can manipulate the Earth’s gravitational field to make an object heavier (“plus-gravity”) or lighter (“null-gravity”).

Geo-Force can project scorching lava blasts that have the effect of volcanoes. He can also fly at great speeds for short periods of time. According to the Young Justice Wikia, he will play a large role in the first three episodes of the season.

Thirteen, also known as Traci Thirteen, has been teased as an exciting addition to the Young Justice team. The character is a sorceress who was forbidden by her father from using her abilities because magic was the cause of her mother’s death. She later struck out on her own under the alias Girl 13.

At one point Thirteen dated Jaime Reyes, the current Blue Beetle, so its very possible that we see a romance blossom between the characters throughout the season. A similar character appeared as Jaime Reyes’ friend in Teen Titans: The Judas Contract.

According to the Young Justice Wikia, Katana is a member of the Justice League. She is a Japanese swordswoman who wields the Soultaker Sword, which houses the souls of those it killed, including her husband Maseo.

This is her fifth animated appearance, following Batman: The Brave and the Bold, Superman/Batman: Public Enemies, Beware the Batman and DC Super Hero Girls. 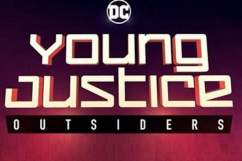