Elvis Presley continues to loom large over the entertainment world. Not only is he the focus of the Elvis Tribute Show, which airs tonight on NBC and will see celebrities perform renditions of his famous songs, but his family continues to work in both the music and film industry. Read to learn more about each of Presley’s four grandchildren, and what they do professionally.

Danielle Riley Keough was born on May 26th, 1989, to Lisa Marie Presley and her first husband, Danny Keough. “I grew up very privileged with my mother, but my dad didn’t live like that,” she told The Guardian. “And I think experiencing both sides has been helpful. My father had mattresses on the floor of his apartments. He lived in cabins and trailer parks. He just didn’t have much money.”

Riley started acting and modeling when she was in her teens, and she made her film debut in 2010’s The Runaways opposite Kristen Stewart. Since then, Riley has found critical and commercial success as an actress in films like Mad Max: Fury Road, American Honey, Logan Lucky, and Under the Silver Lake. Riley is currently married to British stuntman Ben Smith-Petersen, whom she wed on February 4, 2015 in Napa, California.

Benjamin Keough was born on October 21, 1992 to Lisa Marie Presley and Danny Keough. He is Riley’s younger brother. He gained attention at an early age for having a striking resemblance to his grandfather, and even appeared as himself in the 2005 documentary Elvis by the Presleys. His other screen credits include the short film Rod & Barry.

Despite being part of the Presley lineage, Benjamin has made a point staying out of the limelight. He does not have an Instagram, and has not made it clear whether he wishes to pursue music like his grandfather and parents or continue to pursue acting like his sister.

Brunch with the most beautiful ladies …. ps that's my mom not me… lol ❤️???

Harper and Finley Lockwood were born on October 7, 2008 to Lisa Marie Presley and her fourth husband Michael Lockwood. The latter is a musician who divorced Lisa Marie in 2016, when the twins were 7 years old. In an interview with Celebrity Insider, their grandmother, Priscilla Presley, spoke on the joys of raising them.

“It’s great; it’s absolutely great. I love it; I love it,” she said. “Having twins is quite an experience, I have to say. Both of them are very different. Wonderful kids, wonderful children. It’s a very family-oriented environment for them.” Despite not having much of a social media presence given their young age, both Harper and Finley have appeared in photos with their older sister Riley. 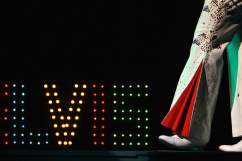