Kaihla Rettinger, a New York City attorney, is the mother of Brendan McLoughlin’s baby son. She gave birth just three days after the NYPD cop met country star Miranda Lambert, whom he has since married.

McLoughlin’s dating history attracted a lot of attention after Lambert broke the news of their nuptials on February 17, 2019. In addition to his relationship with Rettinger, it came out that McLoughlin had been engaged to former professional soccer player Jackie Bruno.

Bruno’s mother told Us Weekly that Rettinger called her daughter to tell her that she was pregnant with McLoughlin’s child. Carol Bruno says Rettinger reached out after Jackie had returned home from playing in Sweden, and said she was 7 months pregnant.

Rettinger gave birth to a son on November 5, 2018. The baby came a few days early; their baby registry listed a due date of November 10.

McLoughlin met Lambert just three days before the arrival of his son. They were introduced when she performed on Good Morning America on November 2, 2018.

Neither Rettinger nor McLoughlin have publicly commented as to when exactly their relationship ended. People reported that they celebrated Thanksgiving together in 2018.

The magazine also cited a “source close to McLoughlin” who suspected that he was involved with both women at the same time. The source described McLoughlin as having a “history of cheating.”

McLoughlin and Lambert say they tied the knot in late January 2019 but waited a few weeks before making the news public.

2.  Rettinger Works as a Legal Associate in Manhattan

Rettinger has been with her current employer, the Global X Management Company, since October 2016. According to her LinkedIn profile, she started as a Business Management Associate and became a Legal and Compliance Associate in February 2019. She was promoted to Assistant Vice President of Legal & Compliance in December 2020.

Rettinger wrote on her LinkedIn page that her job involved “assisting the firm’s CEO across multiple functional areas including finance and accounting, HR, and training and development. In 2019, her role expanded to legal and compliance, where she worked alongside the CCO and General Counsel in managing the firm’s legal functions and regulatory compliance efforts.”

Prior to joining the corporate world, Rettinger worked in defense. Her first professional job after earning her law degree was with the Mecklenburg County Public Defender’s Office in Charlotte, North Carolina.

3. Rettinger Studied Criminal Justice as an Undergrad Before Earning a Law Degree

Rettinger attended Sacred Heart University in Connecticut for her undergraduate education. According to her LinkedIn profile, she earned a bachelor’s degree in criminal justice in 2013. Rettinger was on the dance team at Sacred Heart, competed in Model United Nations and was a member of Alpha Phi Sigma, a criminal justice honors society.

Rettinger then headed south to become a lawyer. She graduated from the Charlotte School of Law in 2016. The school closed down the following year.

During law school, Rettinger interned with Safe Alliance, during which she reportedly worked on two domestic violence cases. She also interned for a month with the Mississippi Center for Justice, where she “researched and interpreted newly-implemented state laws concerning elementary education to ensure compliance with federal law.”

Rettinger appears to be a native of Bayside, New York, which is part of Queens. An online search of records indicates she has family members still living there.

Rettinger lived with McLoughlin on Staten Island for a time, according to People. Rettinger was the one to tell McLoughlin’s now-former fiancee, Jackie Bruno, that she was expecting a child with him, the magazine reported. When Rettinger reached out to Bruno, she reportedly told Bruno that she had been living with McLoughlin and his family.

5. Miranda Lambert Was Excited to Become a Stepmom

Lambert has publicly expressed that she loves being a stepmom to McLoughlin’s son. It’s unclear how Rettinger feels about the situation. She has not publicly commented, appears to have deleted her Facebook page and her Instagram is private.

Entertainment Tonight quoted a source close to Lambert who said that the singer was ready for children of her own. “Miranda and Brendan both want kids. She never felt ready to have children until she met Brendan and now she’s excited to be a stepmom. She even says it’s great practice for when she has a baby.” 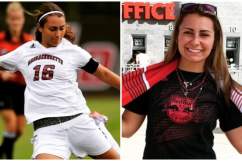