Peter Tork has passed away. The former guitarist of the rock group the Monkees was confirmed dead by his sister after a decade of battling a rare form of cancer. He was 77. Tork is the second Monkee to die following lead singer Davy Jones, which leaves only two surviving members of the group’s original lineup.

The duo has continued to tour and perform Monkees songs under the banner of “The Mike and Micky Show.” In 2017 they had to cancel the last leg of their tour when Nesmith began experiencing health problems. “I talked to him the day he left. He sounded a little bit under the weather, a little weak,” Dolenz told Billboard. “He was obviously apologizing profusely. And I said, ‘Hey, buddy. Don’t worry about it. We’ll adjust.’”

“He tends to be quite private about that stuff,” Dolenz added. “Knowing him, he’s such a pro. It must have been enough of a concern that he had to bail on the show, because ordinarily he’s a trouper and he would never do that. We’re just all praying for him, keeping our fingers crossed.”

Nesmith later told Rolling Stone that he had been diagnosed with congestive heart failure and underwent quadruple bypass heart surgery. “I was using the words ‘heart attack’ for a while,” he explained. “But I’m told now that I didn’t have one. It was congestive heart failure. It has taken me four weeks to climb out of it. If anybody ever comes up to you on the street and offers you [bypass surgery] for free, turn them down. It hurts.”

I think, candidly, I’m back to 80 percent,” he added. “I feel like I’m increasing exponentially daily, or at least by orders of five or six percent at a time. I’m seeing the light at the end of the tunnel. My thinking is clear and I know who I am and where I am. It all feels like a natural healing process.” Nesmith is currently on tour and performing songs from his acclaimed 1972 album And The Hits Just Keep On Comin’.

Dolenz continues to release albums under his name and the Monkees banner, with 2018’s Christmas Party featuring contributions from him, Nesmith, and Tork. After Tork’s passing, Dolenz took to Twitter to pay tribute to the guitarist. “There are no words right now,” he wrote. “Heart broken over the loss of my Monkee brother, Peter Tork.” 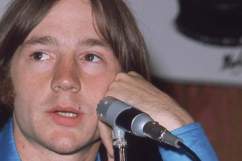