Cassie Randolph is one of the final remaining contestants on The Bachelor that inevitably broke Colton Underwood’s heart by eliminating herself from the show on last week’s shocking “fence jump” episode. Randolph made it all nearly to the end of the show before her father made her realize that he wasn’t sure she was as crazy about Underwood as he was about her.

Randolph is an aspiring speech pathologist from Huntington Beach. She loves to surf, owns two cats named Maverick and Goose, and went skydiving once, which she considers the most “outrageous” thing she’s done. She told ABC that the one thing she wouldn’t do for love is turn her back on her family.

Here’s what you need to know about Randolph:

She Stars on Another Reality TV Series Titled Young Once

YOUNG ONCE Season 1, Ep. 1 of 8 (2016) Cassie Randolph, Caelan Tiongson, Tony Walsh, Rob GroeschellSEASON TWO IS NOW ON YOUTUBE. Check our channel and subscribe. Cassie Randolph reconnects with an old boyfriend while Rob Groeschell and the baseball team concoct a plan to change their negative image on campus. Against Robert Carlson’s advice, Tony Walsh signs up for every school club except the one Robert is leading.2018-10-09T17:28:06.000Z

Randolph was involved in another reality series, titled Young Once, which follows a group of young Christians, including Cassie and her (now) ex-boyfriend, Caelan Tiongson, on a quest to “live counter culturally,” while navigating the way faith plays a role in their daily lives.

The full IMDb summary reads: “YOUNG ONCE is a documentary series that follows a group of young Christians from Southern California on their quest to live counter culturally. Season one documented this eclectic group as they attended one of America’s most conservative private schools, where alcohol, drugs and sex are off-limits. Season two continues the journey as they graduate and face a myriad of difficult decisions as young adults.”

Season 1 was recorded about four years ago, in 2015, according to Reality Steve. When the season ended, Randolph was still dating Tiongson, who had actually passed up an opportunity to play basketball overseas to continue his relationship with Randolph, Marie Claire reports.

However, the season 2 trailer recently dropped and it appears that the two are definitely broken up, although they are trying to remain friends. The second season was apparently recorded over the summer of 2018, shortly before Randolph started shooting The Bachelor, and follows Randolph and her group of friends post-college as they try to navigate the temptations and stress of the real world.

Both Randolph and her ex denied that the two were still dating when she began her journey on The Bachelor, and each wrote a long explanation of how and why their relationship ended on Instagram after viewers started questioning Randolph about Tiongson.

Just a heads up: the rest of this article contains MAJOR SPOILERS for the end of the 2019 season of The Bachelor. Turn back now if you don’t want anything ruined for you! 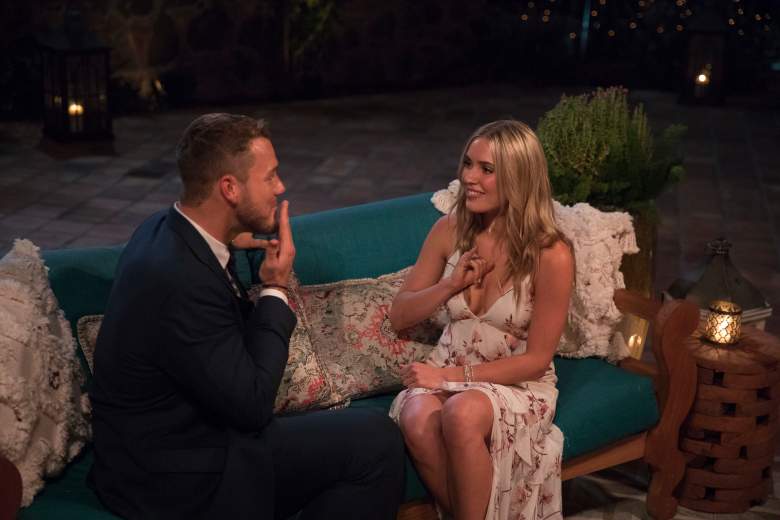 On last week’s episode, Randolph had an overnight date with Underwood. The two spent the entire day together, and both thought the daytime date went extremely well, until Underwood brought up that Randolph’s father didn’t give him his blessing to marry Randolph. Randolph was upset by the news and went back to her hotel room, where her father happened to be waiting.

Randolph’s father told her that he refused to give Underwood his blessing because he just didn’t feel like Randolph was “without a shadow of a doubt” in love with Underwood. Their conversation made her realize that she wasn’t completely sure about her feelings for the bachelor, and that she didn’t want to keep leading him on if she wasn’t completely on board with his proposal. She realized she wanted a relationship like her parents have, and decided that she was going to call things off with Underwood and eliminate herself when she saw him later on for their overnight date.

HB here we come!! Time to meet the fam ?? #thebachelor

The infamous “fence jump” came after Randolph broke the news to Underwood that she was eliminating herself and heading back to the states. During the conversation, Underwood admitted to Randolph that he couldn’t stop thinking about her (even during dates with other contestants) and realized he wanted to choose her.

Randolph still decided to leave, since she wasn’t certain she shared his same feelings or was completely ready to be engaged. After a very long, emotional conversation during what would have been their overnight date, Underwood walked Randolph to her car, hugged the sobbing bachelorette and said goodbye.

After he watched her vehicle drive away, the cameras followed Underwood to his room where he slammed the door. He eventually emerged again, where he briskly avoided the cameras, hopped over a fence and disappeared into the darkness.

So excited #thebachelor is on tonight and even more excited that I don’t have to give my dad a shot (or 5) of whiskey before tonight’s episode ??? @bachelorabc

When Underwood finally returns from his moody walk around Portugal, he decided to call things off with the two remaining contestants – Hannah Godwin and Tayshia Adams. After breaking the news to both of the ladies (and skipping his overnight date with Godwin altogether), he heads back to the states to try to make things work with Randolph, expressing how much he cared about her and how he didn’t need to be engaged if she wasn’t ready.

Although this season didn’t end with an engagement like Underwood was hoping, him and Randolph decided to keep dating and see where things took them. Reality Steve reported that the two are currently dating and still together today and that Underwood has been spotted hanging out with the boyfriend of Randolph’s sister, so things seem to be going well.

READ NEXT: Demi Burnett Update: Where is the Former Bachelor Contestant Now?

Read More
Reality TV, The Bachelor
Cassie Randolph broke Colton Underwood's heart on last week's episode of The Bachelor. Read on to find out what happened between the two following their heartfelt conversation.