Getty David Conrod and Nina Garcia share two children and raise their family in New York. Here's what we know about Conrod.

David Conrod, Nina Garcia’s husband, is a businessman and the CEO of FocusPoint Private Capital Group, a firm he founded in 2010. The couple share two children together and reside in New York.

He works in finance, has a Master’s degree in Business Administration, and enjoyed playing soccer in college. Conrod and Garcia used to own an apartment in Manhattan’s Upper East Side, which they listed for sale at $8.5 million when they were expecting their second child.

Here’s what you need to know about Garcia’s husband:

He is The CEO of FocusPoint & a Member of LANDC Investment, a Financial Services Platform

According to Earn The Necklace, David Lucas Conrod, 57, and 53-year-old Nina Garcia have been married for over a decade and reside in New York where Conrod’s business, FocusPoint Private Capital Group, is based. FocusPoint helps businesses raise capital with financial strategies.

In 2017, he co-founded Rise Line Business Credit, a lending firm for smaller businesses, ETN reports. He’s also a member of LANDC Investment, a financial services platform, which is the parent company to FocusPoint and Rise Line. 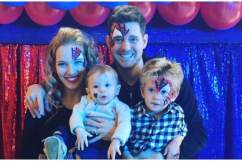 Conrod Was Head of Guggenheim’s Distrubution Arm, The Private Fund Group Where He Raised Over $13 Billion

After acquiring his Master’s degree, he focused on raising HSBC Asset Management’s private equity fund in Asia and Europe as the financial giant’s director of sales and marketing,” ENT reports.

Conrod graduated from Ohio’s Kenyon College in 1982 with a bachelor’s degree (his LinkedIn profile does not share what the BA is in). At Kenyon, Conrod played soccer and was a letterwinner in the Kenyon men’s soccer team during the 1979-81 seasons, according to the Kenyon Letterwinner’s website.

He has been featured prominently among Kenyon’s acclaimed alumni, and in a 2016 issue of the Kenyon alumni bulletin, he mentioned that he “runs into fellow Kenyon Lords and Ladies often in the Big Apple.”

His profile shows an interest in the International Ski Federation, the Family Office Club, which is the #1 largest family office association in America, and various other interests, including his own businesses and schools he attended.