ABC/Rick Rowell Hannah Brown was the first lucky lady to snag a solo date with Colton Underwood on tonight's episode of The Bachelor.

Hannah Brown was the first lucky lady on the last season of The Bachelor to snag a solo date with Colton Underwood. The two shared a sweet, albeit awkward date, and although Underwood seemed slightly put off by her nervousness at first, the two ended up having a romantic first date together.

Born and raised in Tuscaloosa, Alabama, Hannah is a “proud member of the Alabama Crimson Tide,” according to her biography on the ABC website. She is a graduate of the University of Alabama with a degree in communications, although she is currently an interior designer.

So how far did Brown make it on the show? Read on for more information on Brown and Underwood’s relationship. This is also your MAJOR SPOILER ALERT! Proceed at your own caution if you are not caught up on season 23. Here’s what you need to know about Brown and Underwood:

1. Brown Was Crowned Miss Alabama USA in 2018 & Appreciates Acts of Chivalry From Her Dates

be [happy] ???I want to say a huge thank you to @shallawistastudio for the stunning jewelry that completed all my outfits at Miss USA. I mean, I was decked out in the most amazing, unique jewels and I am so beyond thankful! (check out the insta page to see what I’m talking about!) #blessingsonblessings #jewels #alabamahannah #missalusa #handmadejewelry #rolltide

According to her bio, Brown appreciates an old-fashioned, chivalrous gentleman who goes out of his way to pull out her chair or hold open a door for her (which definitely sounds like Underwood). In her free time, she enjoys playing board games and listening to country music, and her Instagram account shows a certain emphasis on religion. Brown loves Alabama football, claiming that she “never misses a game,” and was crowned Miss Alabama USA 2018.

Brown has a brother named Patrick whom she seems to be quite close to and a few dogs to boot. This Bachelor contender knows how to strut her stuff during a beauty pageant, but she’s also a born-and-bred Alabama girl who isn’t afraid to rock some jean shorts and a cowgirl hat while riding a John Deere mower. 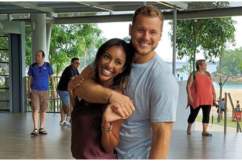 Brown shared during her introduction for last year’s beauty pageant competitions that she enjoys boxing and picked up the sport about three years ago. She said she was a little surprised to discover that she’s pretty good at it and Hannah joked that now she “feels like Muhammad Ali.”

She also says that she struggled to figure out what she was passionate about, which led to some issues with anxiety and depression. “When you don’t know what your purpose is, or your passion is, you don’t really know what life is.”

Her Instagram account is filled with pictures of the Alabama native outdoors, including paddle boarding with her pup, sitting by the poolside, playing Frisbee on the beach and white water rafting with friends.

3. Her One-on-One Date With Underwood Showed Some Awkward Moments of Silence & Nerves from Brown

If that toast ? doesn't go well, Hannah B. might be toast. ? #TheBachelor pic.twitter.com/KZUYPknUQb

Brown impressed viewers on the season premiere with her sweet and bubbly nature, and is clearly able to hold her own when it comes to charming her way through beauty pageants, but her nerves somewhat got the best of her during her 1-on-1 date with Underwood earlier in the season.

Although she got to celebrate her birthday alone with Underwood, a clip of her date with Underwood (above) shows a nervous Brown who failed to find the words for a toast, which apparently prompted Underwood to question how serious she was about the relationship and whether or not she was just wasting his time.

“If Hannah can’t open up, I’m not going to be giving her a rose at the end of the night,” Underwood told the camera.

Just a warning: the following fact is a MAJOR BACHELOR SPOILER, so proceed at your own risk if you don’t want anything ruined for you, although the show has been over for several months, so you probably already know what’s coming. 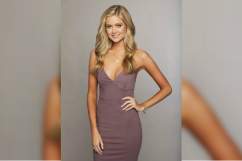 Hannah Godwin, The Bachelor: 5 Fast Facts You Need to Know

4. Brown Was Sent Home Following Her Date With Underwood’s Parents

impress the parents 101: Smile real big and show them yes, I’m from Alabama and I have all my teeth. ?#rtr

During a previous episode of The Bachelor, Brown said that she doesn’t date “just to date” and that she “dates for marriage.” Although Underwood’s intentions were clearly to find a wife, he told Brown he just couldn’t match her feelings for him, telling her that he couldn’t see a future with her where he could “shake her father’s hand be honest about his feelings in their relationship.”

Although Brown was confused by Underwood’s admission, she accepted rejection and thanked him for being honest with her. She also said that she wouldn’t want Underwood to meet her family if he didn’t feel the same way for her as she did for him, and though she took the news gracefully enough, she admitted she felt blindsided by his confession.

Read on to if you want to find out who he does choose in the end, or turn back now if you don’t want anything spoiled for you.

5. Underwood Chooses Cassie Randolph in The End & Hannah B. Was Chosen As The Next Bachelorette

ready for all the clapbacks tonight? #WTA #thebachelor

According to Reality Steve, the last few episodes of the show involves Underwood’s overnight dates with the remaining contestants – Tayshia Adams, Cassie Randolph and Hannah Godwin. Underwood has an overnight date with Adams, followed by an overnight with Randolph.

Reality Steve reports that his date with Randolph apparently makes Underwood realize he is in love with the young lady, who actually ends up leaving the show after realizing she isn’t ready to be engaged. Underwood decides to break things off with Godwin and Adams, leaves the show, and follows Randolph back to the states to try to work things out with her.

Although Hannah Brown was sent home after her hometown date with Underwood, fans of the show loved “Hannah Beast” so much that the network decided to cast her as the next Bachelorette. Maybe she will finally find someone to return the love that Underwood didn’t share?

READ NEXT: Demi Burnett’s Mother is in Prison for Bank Fraud