The 2019 iHeartRadio Music Awards airs at 8 p.m. ET/PT and 7 p.m. CT, on the Fox network. Last year, Hailey Baldwin and DJ Khaled were the co-hosts of the event, but this year, T-Pain is the host. Recently, T-Pain was named the winner on the new hit competition show The Masked Singer, on which he was disguised as a monster. Now, T-Pain is stepping into his hosting duties and there are a ton of other big celebrities in the lineup of performers and presenters. Read on below to see who is presenting and who is delivering show-stopping performances for tonight.

Halsey, Travis Barker, and Yungblud are reportedly teaming up for their performance, which should make for great entertainment, especially since Halsey and Yungblud are supposed to be dating. In addition to performing, Halsey is this year’s recipient of the Fangirls Award. She is also a nominee in categories including Female Artist of the Year, Best Lyrics, and Best Cover Song. Performers Alicia Keys and Garth Brooks are two other major artists who are honored recipients at this year’s show. Keys is taking home the iHeartRadio Innovator Award, while Brooks will be honored with the first-ever Artist of the Decade Award.

In an interview with iHeart, host T-Pain said he’s most excited to see the Backstreet Boys. T-Pain said, “Just to see them come through and do all the dance moves that were so great and we’re used to. I think that Backstreet Boys are going to blow our minds.” 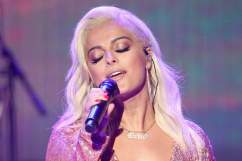 How to Watch the iHeartRadio Music Awards 2019 Online

Katy Perry recently was in the news for her high-profile engagement to off and on beau, actor Orlando Bloom. She is also currently a judge on American Idol. Thicke and Scherzinger were recently judges together on The Masked Singer.