Instagram Ahmir Steward and Jazz Jennings on a date.

Jazz Jennings’ boyfriend Ahmir Steward has some heartbreaking news for Jennings during a sneak peek of tonight’s episode – his mother doesn’t approve of his relationship with Jennings.

Since Jennings introduced her family and fans to Steward, their relationship appeared to be going well. Unfortunately the couple now faces the hurdle of Stewards mother, who doesn’t view Jazz as a woman, and said that Steward would be a “gay man” if he continued to date her.

“My mom is not actually as accepting as I originally thought she would be,” he tells her on Tuesday’s show. Jennings then asks him what his mother said about her. “She would say ‘he’ and ‘that’s a man’ because he was born a man,” Steward says to Jennings, who clarifies that his mother “misgendered” her.

During his confessional to viewers, Steward added that “the most hurtful thing my mom said was that Jazz was still a man and that I would be gay for being in a relationship with Jazz.” He continued: “I lost it because I’m not gay. I’m not attracted to men and Jazz is a female so it just didn’t make sense to me.”

Although Steward reassures Jennings that his mother’s comments hadn’t changed his views on their relationship or his feelings toward her, he mentions that she might not let him back in the house.

“She’s going to kick you out of the house just because you like a girl who happens to be transgender?” Jennings asks. “Right,” Steward answers, and adds of his mother, “That’s just how she is. And I’m very outspoken. So yeah, that could potentially lead to me, I guess, being kicked out of the house or whatever else.”

Jazz tells the cameras, “I’m really touched that Ahmir is willing to stand up to his mother but it’s really scary to think that, you know, just being in a relationship with me could cause him to not even have a home.”

Jennings suggests talking to Stewards mom herself, but Steward says it wouldn’t make a difference or change her views on the subject. Jennings decides that they should just enjoy their time together instead of worrying about everything else, but she later brings the conversation up to her mother, Jeanette Jennings. 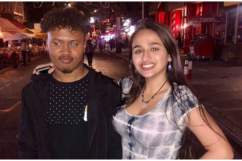 Jeanette Jennings tells her daughter she should let Steward and his mother work things out, and that she would try to talk to his mother when they visit New York City for a followup with her doctors. “It’s really between them. Don’t get involved and may be, she’ll come around,’’ she tells Jennings.

What do you think about Steward’s mom, and her issues with Jennings? Do you think she is right to kick her son out of the house because she doesn’t like who he is dating? Let us know in the comments below, and tune in to I Am Jazz, which airs Tuesday nights at 9/8c on TLC.

READ NEXT: Jazz Jennings is Worried She Won’t Like Sex Because of her “Effed up Vagina”