Despite Cavallari’s openness about her family life on her reality series Very Cavallari, she is fairly private when it comes to her children. She has reportedly stated that her children will not show their faces on camera while filming the show, and has highlighted her reasons for keeping them out of the spotlight, which can be read below.

Here’s what you need to know about Cavallari’s family and children:

1. She Wants Her Children to Live as “Normal” as Possible, Despite Hers & Cutler’s Fame

My life didn’t begin until these 3 angels came into it. Being their mom has been the greatest gift this earth has to offer ❤️

Viewers who tuned in on Very Cavallari on E! may have noticed that although she and her husband, former NFL quarterback Jay Cutler, talk a lot about their children, the kiddos aren’t featured on the show.

“My kids will not be on it,” the mother of three told People last week. “They would love to watch the monitors and they were around sometimes when we would film, but we want to keep them kids. … We want them to grow up as normal as possible. And so when they’re old enough to decide they want a camera in their face, that’s one thing, but for now we just want to keep them kids.”

Cavallari doesn’t even expose the kids on social media if she can help it. She told People in May: “If I post them, it’s of the back of their head or something to that degree.”

Britten and Mack on Married to Medicine Los Angeles

2. She Only Takes Her Children to the Doctor Once a Year & Feeds Them Organic, Gluten-Free Meals

@littlejamesclothing pop up today! We’ll be at The Palisades Village through Monday if you aren’t able to come today for all the fun activities ?

Cavallari doesn’t rush her kids to the doctor every time they get a cold. Actually, they only see a doctor once a year, unless there is an emergency. The mom of Camden, Jaxon, and Saylor told Us Weekly last summer that the only time her kids have been to the doctor is for a routine yearly checkup.

“I got to think we’re doing something right. No ear infections. No nothing,” the Very Cavallari star told Us Weekly. The 31-year-old admitted she is “probably going to get s–t” for boasting about her healthy children, but she couldn’t care less. “I’ve gotten flack for how I raise my kids, but people don’t really understand. I know what I’m doing is right.”

She told the publication that she cooks healthy, gluten-free means for her children and tries to keep their diets as organic as possible. The E! personality even wrote True Roots — a cookbook filled recipes free of gluten.

When Cavallari started to design her new kids clothing line, she only had to look down at her three children for the inspiration she needed to get her creative juices flowing.

“I ask their opinions on everything,” she told PEOPLE during a celebration of her new collection at a Mommy & Me Brunch in Pacific Palisades, California. “If they don’t like something, I don’t do it. They’re my fit models too.” 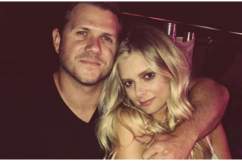 Is Reagan Agee Married on Very Cavallari? Does She Have a Husband?

4. She Has Been With Cutler Since 2010 After Cutler Made The First Move & Invited Her to Chicago For a Date

New episode of @verycavallari tonight! If you missed the first 2 episodes, I did a swipe up in my stories to watch for free. Jay goes into @uncommonjames tonight- you won’t want to miss it ?

While Cavallari was still starring on The Hills, Cutler reached out to the TV star through her publicist to ask Cavallari on a date. She initially turned him down, but eventually met up with him while attending a Bears game in Chicago with her mom and cousin and the two hit it off.

“His sisters used to watch Laguna Beach so he knew who I was. In the middle of filming The Hills, I got a call from my publicist who said, ‘Jay Cutler wants to fly you to Chicago and take you on a date.’ I didn’t know who he was. I didn’t want a boyfriend at the time so I said no,” she recalled during an interview on Steve Harvey in 2017.

The two had an instant connection, according to her book Balancing In Heels. “We hung out two nights later, and that began a swift and intense romance. I flew back to Chicago at least every two weeks. When we were apart, we texted constantly, and he wrote me the sweetest love emails. He was the strong, manly man I wanted but had a sweet, romantic side as well,” she wrote in her book. They dated for eight months before Cutler proposed.

5. She & Her Family Love Animals & Moved to a Larger Home With More Land So They Could Adopt More

The newest little member of our crew. We hatched our own chickens!

Cavallari is no stranger to expressing her love for animals; she often posts pictures of herself with some of their farm animals on her Instagram page, which has occasionally set off some controversy with her vegan fans. She once posted a picture holding a chicken that was captioned “Pet today, dinner tomorrow. Kidding. Kind of,” which sparked some angry retorts.

However, she explained to People not too long after the incident that she and her family love their animals, and that they even sold their home so that they could buy a large house with more land to house their fur-babies.

Very Cavallari premieres on E! at 10/9c, so tune in to follow Cavallari and the rest of the team to see how the season unfolds.

READ NEXT: Brittainy Taylor on Very Cavallari – Who Is The Uncommon James Manager?