Luke Perry has died. The beloved actor was pronounced dead at St. Joseph’s Hospital in Burbank. TMZ reports that he was surrounded by friends and family at the time of his passing. He was 52.

Perry’s cause of death was complications caused by a stroke. He was rushed to the hospital last Wednesday after suffering a massive stroke at his Sherman Oaks home. His representatives state that Perry was sedated in an attempt to give his brain a chance to recover from the trauma of the stroke, but the damage was reportedly too extensive.

Perry’s Cause of Death Was Complications Due to a Stroke

REST IN PEACE: Actor Luke Perry, who starred as 1990s heartthrob “Dylan McKay” in “Beverly Hills 90210” and later in the hit show “Riverdale,” has died less than a week after he was rushed to the hospital from his Los Angeles home for an apparent stroke; he was 52. #rip #restinpeace #lukeperry #actor #losangeles #la #beverlyhills #ca #90210 #riverdale #stroke #worldnewstonight

Perry had been dealing with health issues prior to his stroke. News.com reports that the actor was said to have been experiencing “bad back problems”, which had to be surgically corrected. Perry also faced a health scare in 2015 when precancerous growths were found in his body after a colonoscopy. This prompted him to speak publicly about the importance of checking for colorectal cancer.

“When I heard that this was the most detectable cancer that we know of yet it’s the second most lethal, I just couldn’t figure out why that was and I wanted to get out there and tell people about it.” he told Fox News. “Right now, there are 23 million Americans who haven’t been screened that need to be screened. If I had waited, it could have been a whole different scenario.”

Perry combated the growths by significantly altering his diet and eating healthier. “I have significantly cut down the amount of red meat that I eat,” Perry revealed.
“I used to be, like, a steak and potatoes every night kind of guy, now it’s just for special occasions.” He also told Fox News that he had been exercising regularly.

Perry is best known for playing Dylan McKay on the 1990s soap Beverly Hills 90210. The character made him a teen idol, and he parlayed it into a movie career, acting in such films as Buffy the Vampire Slayer and 9 Seconds. Perry was most recently seen on The CW’s Riverdale, where he played the father of the main character, Archie Andrews.

Perry Is Survived By His 2 Children Jack & Sophie

“I like playing the dad because I like being a dad, and I think it’s a great character in the milieu of this show that I’m the grounded one,” he told The Hollywood Reporter. “I’m the guy who really cares about K.J. — who cares about doing a good job and being a good construction worker. I love that.” Perry is survived by his own two children, Jack and Sophie.

He is also slated to appear in Quentin Tarantino’s upcoming film Once Upon a Time In Hollywood. He is the second member of the cast to pass away, following Burt Reynolds, but unlike Reynolds, Perry already shot his scenes and will be appear in the finished film. 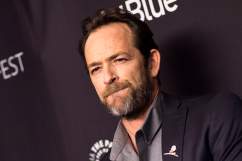 Luke Perry Net Worth: 5 Fast Facts You Need to Know