Adam Lambert’s parents Eber and Leila were crucial to his success as a pop singer. They will appear in the new documentary The Queen and Adam Lambert Story, where they will discuss their son’s childhood, and the steps he took to become Queen’s latest frontman.

In a teaser for the doc, Leila said that she could tell her son was different from a young age. “When Adam was younger, he didn’t quite fit in,” she recalled. “He would do a lot of acting out of fantasy things, and he would ask me to film him and take pictures while he was dancing or singing. We thought, ‘There’s got to be another outlet’.” Eber and Leila decided to put him in a children’s theater group, where he discovered his love for performing.

Took my parents to see their grandson sing with Queen on my mom’s 87th Birthday pic.twitter.com/jHGT9P6QxU

According to the AL Reference Centre, Eber and Leila got married on May 3, 1981. They divorced in 2001, when Adam was 19. Both currently live in San Diego, California, where Eber (pictured above) works as a computer program manager and Leila works as an interior designer. The former lives with his longtime girlfriend, writer Amy Wallen, while the latter got married to a man named Ray in 2018. Adam attended the wedding and later posted photos on his Instagram.

Adam said that his mother not only supported him coming out as gay, but was actually the one who initiated the conversation. “When we had the coming out conversation she kind of initiated it, which was hilarious,” he told People. “At that point, it was great because then we could talk about everything. There was never a point where I was made to feel bad about myself, and I was kind of an out-there kid.”

Leila said that she’s still adjusting to the fact that her son is a global star. “It’s very surreal. I have a hard time realizing that my son is now a household name to many people,” she told Women’s Day. “The beauty is he’s still living in the same town he’s lived in for the last nine years and he still has the same friends. But the amount of work he’s doing has changed. Although he can’t always go places and he has to try to be more inconspicuous, he really appreciates the love and support of his fans.”

Adam said that his parents were completely accepting of his risque stage act. “My dad is a Deadhead, my mom’s a Jewish-American princess from Jersey,” he told Fuse TV. “They never got hung up on stuff like that, and I’m fortunate, because there’s a lot of people who come from households where it’s not OK.” 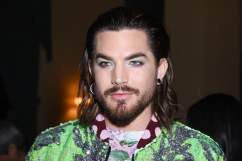 Adam Lambert Age & Height: How Old & Tall Is He?