Colt Johnson and Larissa Dos Santos Lima are starring on season 4 of 90 Day Fiance: Happily Ever After, but they are anything but happy together. In fact, the two are no longer still married. They are divorced. After numerous fights, arrests, and altercations, the couple finally called it quits. And, all the drama will play out on the show this season, which starts with Lima awaiting trial for one of her domestic incidents with Johnson. Both Lima and Johnson each accused the other of physical assault and infidelity. Lima spoke out about cheating allegations on social media and Johnson admitted to behavior that may have been disrespectful.

Lima had posted screenshots of multiple direct messages online and in one of the messages, a woman told Lima that Johnson had been “sending dick pics to other women just so you know … He’s cheating on you and that sucks.” Johnson admitted to acting inappropriately with “a fan”, as he wrote, “Yes, I have received massive amounts of attention from fans, especially women. These things mixed with a relationship that has its problems makes for a dangerous scenario. I crossed the line between fan and fandom. The reality sometimes is lost and this is something I have to handle in private.”

So, how did the couple meet in the first place? It was a quick romance that started at a club in Mexico. The two got engaged after just a few months and got married in June 2018 but, trouble was just around the corner and Johnson filed for divorce in January 2019. Us Weekly has reported that the day Johnson filed for divorce, Lima was arrested for the third time and she was charged with first-degree domestic battery. 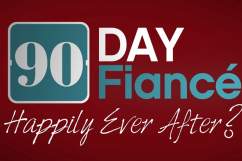 Recently, Lima opened up about the couple’s rocky relationship to Us Weekly, admitting, “In November, we were fighting daily. So that time, I was really hurt by his behavior and I flushed the ring down the toilet.” Lima also said that she regrets participating in 90 Day Fiance and feels it added to the drama of her relationship with Johnson, as well as with his family.

Throughout Lima’s time on the show, she dealt with a lot of backlash from viewers, especially for leaving her kids to journey to America for love. She also received hate comments from people who weren’t fans of the way she treated Johnson’s mother, Debbie, who was living with the couple.

While there have been no reports of a new relationship for Johnson, Lima has moved on with another man and has a new boyfriend named Eric, according to In Touch Weekly. The two met on the Tinder dating app, according to Eric, and he said he hadn’t seen her on 90 Day Fiance prior to meeting her.