Getty Brian May of Queen (L) performs with Adam Lambert

Queen is in the midst of a career renaissance. The rock band is riding high on the acclaim of the Oscar-winning biopic Bohemian Rhapsody and tonight’s ABC documentary. To capitalize on this success, founding members Brian May and Roger Taylor will be will be going on a nationwide tour with Adam Lambert.

According to Billboard, the tour will span 23 cities, and includes many of the band’s most famous hits. It kicks off on July 10 at the Rogers Arena in Vancouver, BC. “We have been designing a brand new visual spectacle that will reframe these iconic songs and we are excited to unveil it!” Lambert wrote in a statement. May added: “Our last tour featured our most ambitious production ever, and got out best notices ever, so we decided to rip it apart and get even more ambitious! Watch out, America!”

In case you haven't seen it already, we've teamed up with @twicketsus so that you can buy and sell spare tickets for our sold out tour dates at no more than face value. More info via link in bio

Tickets are available on StubHub, TicketMaster and the official Queen website. Check out the full list of tour dates below, which span from July to August 23.

Queen first teamed up with Lambert during the 2009 American Idol finale. Lambert recalled the experience during an interview with UCR. “I had a lot of help,” he said, referencing Queen collaborator Spike Edney. “Spike, who’s on keys, I kept looking at over and over again, like, ‘Am I supposed to come in here? How long is the guitar solo? Is it my turn?’ What I love most about being a vocalist is the adrenaline – the thrill of something that can possibly go wrong. I like the danger in that.”

Since that initial performance, Queen and Lambert have performed over 180 concerts together. In 2012, Lambert talked about the pressure of filling in for the late Freddie Mercury and the expectations that fans have. “I was really nervous. Not only did I have to make sure my voice held up and I know all the words, but it was also the perception of the fans; I definitely had some concerns,” he told People. “This is not my music that I wrote: This is me, as a guest, with one of the greatest rock bands of all time, singing the songs that one of the greatest rock singers of all time brought to life.”

“Freddie is irreplaceable. There’s no way to compare to him,” Lambert continued. “It was always my hope that audiences would understand that I’m up there just excited to sing great music that everyone knows. And also to facilitate an opportunity for Brian and Roger, to keep being onstage and playing. Watching them delight in this connection with their fan base is really, really inspiring. And I’m just happy to be a part of it.” 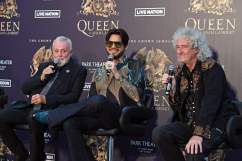 Who Are the Queen Band Members Today?