Taylor Swift is about to break the internet. The pop singer has been teasing fans over the release of new music; and she’s confirmed that the single for the much-anticipated TS7 album will be titled “ME!” It will feature vocals from Panic! At the Disco frontman Brendon Urie.

Swift’s website confirms that “ME!” will be out at 9 p.m. PST on Thursday, April 25, or midnight EST on Friday, April 26. We’ve listed all the different platforms that the single will be released on, and the ways in which you can stream it below.

The music video for “ME!” will make its world premiere on YouTube. In the Instagram post that broke the news, Swift wrote that that will answer questions about the video and her upcoming album in the comment sections starting at midnight EST.

“The video will be out then too and I can’t wait to watch live with you (and answer some questions) as it premieres on @YouTube,” she wrote. “Click the link in my bio and I’ll meet you there a little later!!”

WELL GUYS 4.26 is gonna be here in a few hours and my new song “ME!” featuring the extraordinarily talented and awesome @brendonurie of @panicatthedisco will be out tonight at midnight eastern. In other exciting news, the VIDEO will be out then too and I can’t wait to watch live with you (and answer some questions) as it premieres on @YouTube ?Click the link in my bio and I’ll meet you there a little later!! ?

Swift’s new single will be able to stream it on iTunes and Apple Music. If you have an Apple Music account, you can go into the app on your phone or tablet and set the notifications to alert you when the album is out. Click here to learn how.

Okay I didn’t originally want the lead to be a collab BUT I’M EXCITED BECAUSE I LOVE THEM BOTH #ME!

Based on the standard release schedule for Spotify, Swift’s rumored single will also be available to stream on the platform. If you don’t have a Spotify account, you can sign up for one here and pay only $0.99 for the first three months.

Swift’s anticipated single will also be available to listen to on Tidal. The streaming service offers a free 30-day trial with Tidal Premium, which provides  access to music videos and curated playlists.

There is also a free 30-day trial option for Tidal HiFi, which provides access to videos, playlists and Lossless High Fidelity sound quality. Click here to sign up for either trial.

Swift has been posting pastel-colored imagery on Instagram since February, and fans have been trying to determine what it all means. Swift has also installed a countdown on her official website, which gives fans an option to sign up for alerts and news flashes regarding the rollout.

Fans have speculated that the album will take on a more pop-friendly sound than Swift’s last release, Reputation. The singer talked about her writing process to Elle UK, and how personal experiences are often the best source of inspiration. “The fun challenge of writing a pop song is squeezing those evocative details into the catchiest melodic cadence you can possibly think of,” she said. “I thrive on the challenge of sprinkling personal mementos and shreds of reality into a genre of music that is universally known for being, well, universal.”

“I want to remember the color of the sweater, the temperature of the air, the creak of the floorboards, the time on the clock when your heart was stolen or shattered or healed or claimed forever,” she continued. “You’d think that as pop writers, we’re supposed to be writing songs that everyone can sing along to, so you’d assume they would have to be pretty lyrically generic… and yet the ones I think cut through the most are actually the most detailed, and I don’t mean in a Shakespearean sonnet type of way, although I love Shakespeare as much as the next girl.”

Swift added that she wants to comfort fans with her new music. “I think these days, people are reaching out for connection and comfort in the music they listen to. We like being confided in and hearing someone say, ‘this is what I went through’ as proof to us that we can get through our own struggles,” she remarked. “I think a lot of music lovers want some biographical glimpse into the world of our narrator, a hole in the emotional walls people put up around themselves to survive.” 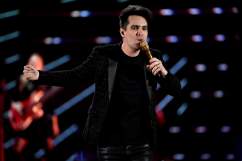 Brendon Urie to Appear on New Taylor Swift Single ‘ME!’