Vinny Guadagnino was always looking for ladies on Jersey Shore. Years later, the “keto guido” returned for Jersey Shore: Family Vacation, and, at the time, he was dating then-girlfriend, Elicea Shyann. Though he was faithful, Shyann was not a fan of some of his behavior while filming, particularly in strip clubs. Shyann lived across the country, so distance was already an issue, and, before the second season of Jersey Shore: Family Vacation started filming, the couple had broken up.

In April 2018, Guadagnino told Us Weekly, “We’re actually not together right now. I love her. She’s a great girl. Long distance… She’s in California and I live in New York. It’s just too hard to keep up. I don’t regret anything. I really care about the girl. A simple girl from California. I’m not looking. She’s the one I like. Logistically, it’s not working right now… but I’m not looking for anything else.”

The next month, Shyann spoke out about her disdain for the show and, Us Weekly reported that she wrote in several deleted social media posts, “Here’s some free promotion!!!! for the trash everyone loves to watch. I’m a real f—king person who wakes up DAILY to more and more bulls—t and heartache. Enjoy the f—king show that is my f—king life. Ppl wonder how ppl end up in the darkest places. Here’s your answer.”

She continued, “Humiliation disrespect zero empathy lol it’s truly AMAZING. Everyone lives for the drama watching good things go to s—t.” And, after an episode aired of Guadagnino getting a girl’s number while still with Shyann, she reportedly wrote on Instagram, “But if I got a guys number, would you f—king like it? With your girlfriend at home, getting a b—itches’ number out doesn’t look good for you.”

Since dating Guadagnino, Shyann appears to have moved on and, according to her Instagram, the model has been accepted into nursing school.

Today, Guadagnino and his partner in crime, DJ Pauly D, are starring on a dating reality show called Double Shot at Love. As for what made Guadagnino take another stab at a relationship? He told The Wrap, “I’m over the one-night stands. They really do nothing for me, and most of the time I’m out in a club now, I come home and I just go to bed by myself. I’m like damn, I wish I had someone meaningful to share this with.”

And, when it comes to looking for his ideal mate, Guadagnino told People, “I am a very complex person — there are elements to me that are nerdy, then there are elements to me that are ratchet. So I like someone that has all that balance, someone that I can binge-watch some nerdy documentaries with, but then knows how to dance and twerk in the club. I also want someone who’s independent, who isn’t in it for the wrong reasons. She has to have so much of her own career going on, she doesn’t need me for anything. I want to be her fan.” 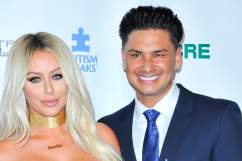