All In the Family returns tonight on ABC. The beloved sitcom will be revived for a live performance that includes actors like Woody Harrelson, Marisa Tomei, and Ike Barinholtz. Given the sitcom’s brief return, however, some fans may be curious to about the original All In the Family cast, and what the surviving members are doing today.

Reiner rose to fame playing Michael ‘Meathead’ Stivic on All In the Family. He won two Emmy Awards during the show’s original run, but he turned to writing and directing once it was cancelled. Reiner has since become an Oscar-nominated filmmaker, with some of his most notable releases being Stand by Me (1985), When Harry Met Sally… (1989), A Few Good Men (1992) and The Bucket List (2007).

Ok, obviously you're out there! And, since I can't hold you back any more, we'll tell ya! We're so excited (and we know you will be too) to tell you Sally Struthers will be with us in October! #gilmoregirlsfanfest #gilmoregirls #sallystruthers #babette

Struthers played Gloria, the daughter of Edith and Archie Bunker on All In the Family. She won two Emmy Awards during the show’s original run, and has since continued to act in film and television. She played the character of Babette on Gilmore Girls, and voiced Charlene Sinclair on the animated series Dinosaurs. She last appeared in the 2018 TV movie Christmas Holiday. Struthers is 70.

Brisebois played Stephanie Mills, the niece of Edith and Archie Bunker. She reprised the role on the spinoff Archie Bunker’s Place, and then retired from acting in the 1980s. Since then, Brisebois had had a successful career as a singer and songwriter. She co-wrote the Natasha Bedingfield hits “Unwritten” and “Pocketful of Sunshine”, and was nominated for the Best Original Song Oscar for her 2015 composition “Lost Stars.” Brisebois is 49.

Happy Birthday To All In The Family Star #jeanstapleton

Stapleton was best known for playing the long-suffering Edith Bunker on All In the Family. The matriarch role earned her three Emmy Awards and two Golden Globes for Best Actress in a comedy series. She made a handful of cameos on the spinoff series, Archie Bunker’s Place, but asked to be written out due to her growing tired of the character. Stapleton died on May 31, 2013. She was 90. 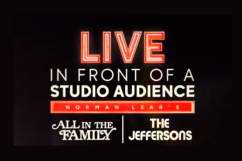 Watch ‘All In the Family’ & ‘The Jeffersons’ Live Stream Online