The top 3 contestants from American Idol 2019 are performing tonight in a live, coast-to-coast finale episode, singing for America’s votes. Only one of them will be named the winner at the end of the finale. Like seasons of the past, for the finale episode, celebrity music artists appear to perform with cast-offs and finalists. In addition the judges each perform, as do the top 10 finalists.

The official ABC description of tonight’s episode states, “Following a cross-country search for the next singing sensation, American Idol rounds out its second season on ABC with an epic grand finale event, featuring Idol‘s Top 3 contestants: Alejandro Aranda, Laine Hardy and Madison VanDenburg. For the first time in Idol history, America’s live coast-to-coast vote will determine the winner of the iconic singing competition series, with all voting taking place during the show. The crowning moment will be preceded by special performances from music legends, including Idol‘s very own superstar judges, the return of fan-favorite contestants from the current season and a special visit by last season’s winner, Maddie Poppe.”

If you would like to know the spoilers on what to expect from tonight’s performances from the contestants, we have the rundown on each. And, for those who have been out of the loop this season, we also have short descriptions of each of the remaining top 3 contestants. Read on for the performance spoilers and additional contestant details below.

A shoutout from Alejandro Aranda to all the Homies ?? #AmericanIdol

Since Aranda’s first audition on American Idol this season, the judges and viewers have been hooked. His audition went viral and he has been said to be a front-runner on the show ever since. It’s clear that Aranda is a professional performer and his performances have been consistently pleasing. Aranda puts his own spin on popular songs for his performances and also has performed his own original songs on the Idol stage. The Huffington Post reported that Katy Perry has said that Aranda could definitely be the next winner of American Idol. 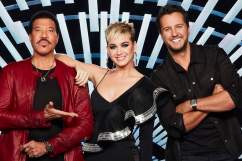 A special message from Laine Hardy to the whole Hardy Party ?? #AmericanIdol

Laine Hardy has really come into his own this season and he is a definite favorite. You may remember Hardy from the previous season of American Idol, but he didn’t make it nearly as far in the competition as he has this time around. Hardy actually didn’t intend on auditioning this season. He appeared during the auditions, playing the guitar for a friend who was trying out for the show, but the judges pleaded with him to re-enter the competition. Fortunately for Hardy, he took the judges up on their offer. With singer Jon Pardi, Hardy is expected to deliver “Night Shift” and “Dirt On My Boots” on the Idol stage tonight.

A big thank you from Madison VanDenburg to everyone in the VanFam ?? #AmericanIdol

Madison VanDenburg is a 17-year-old high school student whose voice is beyond her years. Ahead of tonight’s finale, VanDenburg spoke with Billboard and said, “I’ve worked most of my childhood years pursuing music and it’s been my dream to be an American Idol ever since I was a little girl. To win this competition would change my life forever and give me a platform to share the power of music to those who need it. It would make all the years of effort I’ve put in worth it.” Tonight, VanDenburg is singing the songs “All To Myself” & “Speechless” with the duo Dan + Shay.

All three of the top 3 finalists will participate in singing “Dancing on the Ceiling” opposite judge Lionel Richie, with the rest of the top 10 from this season.