There is a new American Idol, and its Laine Hardy. The Louisiana crooner took the top spot over Alejandro Arenda, and he closed out the season finale with a stellar performance of his new single. Read on below for a recap of the finale and its major events:

8:00 – The finale opened with judge Lionel Richie and the rest of the Idol team singing a rendition of his classic single “Dancing on the Ceiling.” Afterwards, host Ryan Seacrest laid out the ground rules and said that this is the first time that fans will be able to vote for their favorite performer in real time.

8:10 – Laine Hardy’s first performance is a cover of “Home” by Marc Broussard. His performance knocked out the judges, each of whom commended his soulful delivery. Richie called his cover “nasty” (in a good way), while Katy Perry told him that if he stays focused, he can become one of the biggest pop stars in the world (!). Laine thanked the judges and admitted that he was especially nervous tonight.

8:15 – Madison VanDenburg is next up, and she performs a cover of “Shallow” by Lady GaGa and Bradley Cooper. Like with Hardy, the judges were wowed. Luke Bryan commended her for digging it and getting better over the course of the season. He said that she has “a twinkle in her eye” that speaks to people. Richie said that she was truly “on her way”, and Perry said that the greatness is finally starting to “come out” of her. Madison said that she was shaking more than normal during tonight’s performance.

8:25 – Alejandro Aranda is the third competitor to perform, and he sings an original track, “Millennial Love.” Afterwards, the judges not only praised his performance, but his songwriting skills. Richie commended him “as one songwriter to another”, while Perry told him to never lose sight of his talent. Bryan echoed their sentiments, gushing about Alejandro’s star power. Alejandro said the lyrics of the song were inspired by his generation, and how people his age need to focus on relationships over their cell phones.

8:30 – Seacrest steps away from the performers and asks the judges who they think the standout of the first round was. Bryan singled out Madison as his favorite performance so far, while Richie and Perry side with Alejandro as the “winner” so far. That said, Bryan says its near impossible to pick a clear winner given the talents of all three performers.

8:40 – The show airs a video about Laine and his family. In the video, he admits to missing his family, but they encourage him to pursue his dream. We then cut to Laine’s second performance of the night, a throwback cover of “Jambalaya (On the Bayou).” Bryan said he loved Laine’s song choice, and his decision to represent his hometown. Perry, on the other hand, was so taken with Laine’s performance that she asked him to take her fishing!

8:50 – Back from commercial break, and Seacrest welcomes last year’s Idol winner, Maddie Poppe. She discusses her debut album, Whirlwind, and her new single “Little Things.” Maddie jokes about being bad on TV, saying that she doesn’t know how she managed to win Idol in the first place. We then cut to a video of Madison visiting her high school in New York, and how her “unreal” Idol experience has impacted her family.

9:00 – Madison steps up and belts a cover of the Kelly Clarkson hit “Breakaway.” After her performance, Bryan compliments her range and her daring choice to cover Clarkson, another Idol alumni. Perry urges Madison to continue to “grow” and “nurture” her talent, and promises that if she does, she’ll go far.

9:10 – The show gives us a video that documents Alejandro’s story. In the video, he gets emotional over the support his hometown has given him, and admits that he never really had much support as a kid growing up. We then cut to his searing rendition of the song “Tonight.” Perry commended Alejandro for “raising the stakes” of the series, and applying an artistry that many Idol contestants haven’t come close to matching. Bryan chimed in, saying that he’ll buy a copy of Rolling Stone when Alejandro is on the cover.

9:20 – Former American Idol winner Carrie Underwood shows up to perform her latest single, “Southbound.” Once she’s through with her vibrant performance, Seacrest unveils who the first competitor to be eliminated is: Madison VanDenburg.

9:35 – After a video recapping the highs and lows of the past season, Seacrest welcomes R&B singer Montell Jordan to the stage to sing his timeless hit “This Is How We Do It.” Perry is especially excited, as she considers it to be one of her favorite songs. After a commercial break, Perry takes the stage with Daddy Yankee to perform the single “Con Calma.”

10:10 – After a video montage of Bryan’s various movie references and silly moments during the season, he takes the stage to perform his single “Knockin’ Boots.” He also performs the Police classic “Every Breath You Take” alongside Idol alumni Lacy Kaye. John Pardi took the stage after a commercial break to perform his latest single.

10:40 – Perry returns to sing another duet, this time its “Unconditionally” with Jeremiah Lloyd Harmon. After that, Weezer performed a cover of “Africa” with Wade Cota, and legendary funk group Kool & the Gang hop onstage to perform a medley of their greatest hits; including “Hollywood Swinging” and “Ladies’ Night.”

10:45 – After a video setting up Laine’s performance, he tears through his final song with an energetic turn. Bryan is the first to speak up, and he tells the youngster that he has a tone in his voice that’s so unique. Perry said that he wasn’t ready the first time he auditioned, but that he has the “it” factor this time.

10:50 – Alejandro delivers a sensational acoustic performance to close out the night and the season. Afterwards, Bryan said that Alejandro changed their lives with his songs, and is thankful for getting the chance to see him. Richie commended his “instant identity” and called him a gift to all the viewers.

11:00 – Laine Hardy is the winner. He narrowly defeats Alejandro to become the next American Idol. 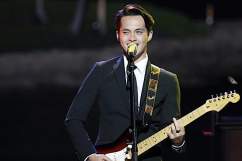 Laine Hardy Age & Height: How Old & Tall Is He?

American Idol rounds out its second season on ABC with an epic grand finale event, featuring Idol’s Top 3 contestants… For the first time in Idol history, America’s live coast-to-coast vote will determine the winner of the iconic singing competition series, with all voting taking place during the show.

The crowning moment will be preceded by special performances from music legends, including Idol’s very own superstar judges, the return of fan favorite contestants from the current season and a special visit by last season’s winner Maddie Poppe.

Hardy said that he remembers watching Idol as a kid, and is eager to prove that he has what it takes to be a star. “I remember my mom turning it on whenever the season started. We’d all watch it as a family,” he told Billboard. He also joked that his longevity on Idol has caused him to miss out on fishing back in his native Baton Rouge. “I’m missing fishing right now, because the fish are about to start biting,” he remarked. “I was going to play a bunch of shows and there’s a big bash on the river where they bring a big barge out and put a band in the middle of the lake.” 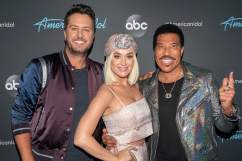 How Long Is the ‘American Idol’ Finale Tonight?