American Ninja Warrior returns tonight on NBC. The competition series airs its season eleven premiere at 8/7c and sees a group of athletes pursue their common dream of reaching Mount Midoriyama via the world’s most notorious obstacle course. Read on to meet the cast of athletes, as well as the hosts and side reporters that will be guiding us through the season.

American Ninja Warrior will be hosted by Matt Iseman and Akbar Gbajabiamila. Iseman is an actor and comedian who won season eight of NBC’s The New Celebrity Apprentice. He made his film debut in Transformers: Revenge of the Fallen and has since made appearances on The Drew Carey Show, NCIS, and General Hospital. He currently lives in Los Angeles.

ARE. YOU. READY?! Drop a ? below if you'll be watching! #AmericanNinjaWarrior

Gbajabiamila is a former NFL athlete who played on teams like the Raiders, Chargers and Dolphins. In addition to his American Ninja Warrior duties, he also hosts the NFL Network’s NFL Fantasy Live and recently published his first book, Everyone Can Be a Ninja: Find Your Inner Warrior and Achieve Your Dreams. The book draws inspiration from his experience on American Ninja Warrior and details his own path to success.

Zuri Hall is also on hand as a side reporter, replacing Kristine Leahy. In addition to her American Ninja Warrior role, she is a correspondent for E! News and the co-host of What the Fashion on Snapchat. Hall previously hosted the aftershows and reunion specials for MTV’s reality competition The Challenge.

Put your game faces on. #AmericanNinjaWarrior is ☝️ month away.

Some of the cast members who will be competing this season are Grant McCartney, Adam Rayl, Flip Rodriguez, Tiana Webberley. According to Ninja Guide, McCarthy hails from Honolulu, Hawaii and made his American Ninja Warrior debut during season seven. He’s competed in every season since his debut, and has also competed on all three seasons of Ninja Vs. Ninja as part of the team Golden Hearts.

Rayl debuted on season eight of American Ninja Warrior. He managed to clear the city level competitions during both seasons eight and nine, and qualified for the Vegas Finals, where he cleared Stage One. He also participated in the third season of Ninja Vs. Ninja as part of team Tri-Hards.

This Season Will See the Return of Several ‘ANW’ Veterans

@islandninja hosts one of the most exciting competitions yet! It all goes down only on Snapchat! ?

Webberly has competed on American Ninja Warrior since season seven, and she qualified for the Vegas Finals during season eight. She’s participated in all three seasons of Ninja Vs. Ninja, with her first two as part of Team Ronin, and the third as part of team Iron Grip.

According to NBC, there will be several changes made to the show during this season. After lowering the age limit from 21 to 19, season eleven will provide several new obstacles and rules, including a “challenging twist to the Mega Warped Wall and the introduction of bonus obstacles that offer a competitive edge.” 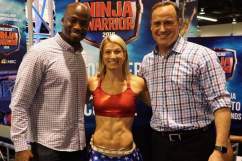