American Ninja Warrior returns tonight at 8/7c on NBC. The competition series follows a group of athletes as they try to scale the world’s toughest obstacle course and get to the hallowed Mount Midoriyama.

Ninjas who successfully complete the finals course in their designated region move on to the national finals round in Las Vegas, where they face a multi-stage course. The ninja who completes all four stages takes home the grand prize of $1 million. If none of the competitors finish all four stages, the ninja that advances the farthest, otherwise known as the “last ninja standing,” will take home $100,000.

Our hosts acting out emoji's is a secret #AmericanNinjaWarrior skill we wish we could ALL have. ? #NBCU2019

Zuri Hall takes over Kristine Leahy’s role as sideline reporter this season, and she told SB Nation that she’s eager for fans to check out the obstacle courses they have in store. “This is not normal. This transcends normal fitness. It’s really next level,” she explained. “Honestly, even as people were wiping out, I was like good on you for making it as far as you did. I don’t know if I could have made it up the steps to get on to the obstacle course!”

Hall also talked about the difference between interviewing celebrities and talking to the everyday people who appear on the show. “Hollywood and red carpets are one thing, but what gets me excited about interviewing people here and getting to know the American Ninja Warrior family is, it’s so human and so real,” she said. “Life is full of things that you can’t expect or plan for, and I love that Ninja Warrior shares those sorts of stories. A lot of people are competing because unexpected things have happened to them and this really means something to them. That’s the part that really gives me chills and gets me excited.”

Family time + #AmericanNinjaWarrior = the BEST summer ever! The fun begins May 29 on @nbc. ?‍?‍?‍?

According to NBC, there will be “several new obstacles and rule changes await the competitors, including a challenging twist to the Mega Warped Wall and the introduction of bonus obstacles that offer a competitive edge.”

Matt Iseman, one of the show’s two hosts, talked to Decider about the obstacles and how they differ from past seasons. “We’re right in the middle of our 11th season of American Ninja Warrior the mothership, and it’s the same. Relatively, the obstacles are a little bit smaller,” he explained. “But proportionately, the obstacles are every bit as challenging. What I loved about it is that the show treats everybody the same. They all compete on the same course.”

“Whether you’re 19 or 77. Whether you have one leg or you’ve been an Olympic gold medalist or you’re a Navy Seal: everyone’s going on the same course,” he continued. “It’s opened my mind to it… When you remove the limitations that you place in your mind on it, and you just go out there and execute, it’s amazing what these athletes can do. I’m so happy that we got to see them get their chance on the course.” 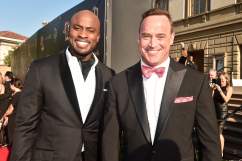