Instagram Ashley Martson, star of TLC's 90 Day Fiancé, had two children before marrying her husband Jay Smith, although her children do not appear on the show.

Ashley Martson of 90 Day Fiance is married to Jay Smith, but she came into the relationship with two kids. Her children are not featured on the show, as she chooses to keep their lives separate from reality TV. Martson, however, has put her own personal life in the spotlight, and on tonight’s episode of 90 Day Fiance: Happily Ever After, Martson, who is on the rocks with Smith, meets up with an ex.

According to Your Tango, Martson’s children are 11 years old and 7 years old. She was also engaged twice before she got married to Smith. Apparently one of the engagements became quite hostile and Martson pressed charges against the ex involved. We’re guessing that he’s not the ex she hangs out with on 90 Day Fiance: Happily Every After.

In January 2019, Martson filed for divorce from Smith and then canceled the filing. In February, Martson came out to say that she and Smith never broke up, as reported by Newsweek. Martson said, “Since I’m such a ‘money-hungry scammer,’ I’m breaking the NDA and surprise: Jay and I have never separated since the day we were married. Breaking the NDA means I won’t be paid a dime for future shows. We were made to act as if our relationship was no longer active.”

Then, in April 2019, Martson again filed for divorce and spoke out online, writing, “It’s all fun [and] games until [your] ass gets deported. Have fun at the strip club with MY money and MY car you’re driving around without a license!” So, fans may wonder if the couple has really split or not. But, Us Weekly has reported that Martson is dating someone else after the latest divorce filing.

On April 26, 2019, Martson revealed to Us Weekly, “I’m really happy right now. It’s nothing serious. [I] have found someone.” She said that she met her man at an event and that, “I’m in a much better place right now and surrounding myself with someone who’s honest and treats me well.”

Martson also talked about the possibility of Smith being deported since they are splitting up. She said she felt bad about his possibly being sent home to Jamaica, but In Touch Weekly reported that she also said, “I saw where he came from and it’s not the best life. But the reason why he would be deported is for what he chose to do.” She then added, “It’s kind of his problem.”

Accusations of infidelity have plagued Smith throughout his relationship with Martson, even being caught on a dating app just days after the couple’s wedding. 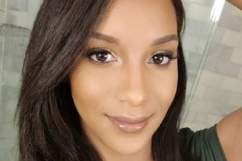