Instagram Colt Johnson's mother Debbie Johnson has been his biggest supporter since he first appeared on 90 Day Fiancé. Here's what we know about Debbie.

Colt Johnson’s mother Debbie believes her son was absolutely a victim of abuse at the hands of his estranged wife, Larissa Lima, after the Brazilian reality star was arrested for a third time for misdemeanor domestic violence charges earlier this year.

Debbie and Larissa actually got along well enough in the beginning of Colt and Larissa’s relationship, but it didn’t take long for the two to start butting heads. Here’s what you need to know about Colt’s mother, Debbie Johnson:

1. Colt Lived With Debbie For Most of His Life & Struggled With Moving Out When Larissa Wanted Her Own Place

Colt has lived with his mother Debbie for the majority of his life, and his relationship with his mother played a significant role in the mounting issues between him and Larissa. As soon as Larissa arrived in Las Vegas, she made her desire to move away from Debbie very clear, and when they started looking for places to live, it was obvious that both Colt and Debbie struggled with the idea of being apart.

In a 2018 episode of 90 Day Fiancé, Colt and Larissa spent the day looking at new homes for the two of them to move into. When they returned to the house that they shared with Debbie, Colt had to break the news to his mother that they were moving out. Debbie asked Colt what they were up to, and he nervously told her, “We looked at some houses.”

Although she appeared to take the news alright at the time, she tearfully told the cameras later that she was heartbroken to see her son move away. Colt tried to suggest finding a place near their new home, or finding a bigger house for them all to live in, but Larissa shut that idea down quickly, telling the cameras “I don’t want to live with Colt’s mother and I don’t want to live next door. It’s time … he cut the umbilical cord.” 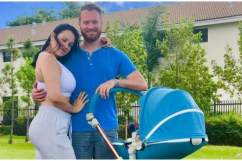 2. She Believes Colt Was Abused By Larissa

I’m excited to reveal that not only that 90 Day Fiancé: Pillow Talk will return with new episodes in September but that I will be on it with my mother @motherdebbiej. Expect specials guests such as Cookie Dough and her friends! #90dayfiance #imback #coltee #jackdaniels

Larissa was arrested for domestic abuse on several occasions, the most recent one taking place earlier this year on January 10, when she allegedly attacked her husband and was arrested in Clark County, Nevada. She was later charged for misdemeanor domestic violence. Las Vegas Metropolitan Police Department Officer Jay Rivera said, “[Colt] had a swollen lip, and his gums and teeth were bloodied,” and that Larissa “was the aggressor in this case.”

Larissa did have scratches on her body as well, but TMZ reported that they appeared to be self-inflicted. Both photographed themselves with bloody injuries to their faces following the latest incident. Larissa had also been arrested twice before for domestic violence against her husband in 2018 – the first time was in June, just days before their wedding, and again in November, though charges in both cases were dismissed.

Debbie spoke to SoapDirt at the courthouse when Larissa was arraigned on her charges. Debbie told the SoapDirt that she believes Colt was definitely the victim of spousal abuse at the hands of Larissa, and that he was planning to do some advocacy work to raise awareness of “this type of abuse” once the trial, divorce and drama was behind him.

3. She Wants Justice For Colt & Claims That Larissa Isn’t in The Clear Just Because Colt Dropped The First Two Charges Against Her

Our new friends, Janelle and Brian. With Colt and I. They were so kind they gave us a fantastic cat condo. When we get together we will take pictures. Thank you guys. It was so nice meeting you

Debbie also told SoapDirt that Larissa isn’t completely off the hook for the first two domestic abuse charges against her, despite the fact that Colt dropped them. She said that although Colt declined to press charges, her cases are still active, although they aren’t as pressing and have been “put on the back burner” for the time being. Debbie also revealed that her son has up to a year to go back and ask the DA to prosecute.

She told SoapDirt that she wants justice for Colt and all that he’s been through, and that she hopes Larissa “gets what she deserves” for everything she put him through. 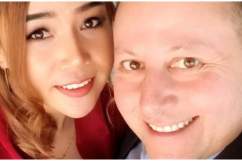 David & Annie, 90 Day Fiancé Update: Are They Still Together?

4. She Argued With 90 Day Fiancé’s David Toborowsky About Her Son on Instagram

90 Day Fiancé stars David Toborowsky and Annie Suwan chimed in about Colt and Larissa’s relationship and subsequent abuse accusations on The Tomorrow Show back in February, which sparked an angry reaction from Debbie.

David was asked what his take was on Colt and Larissa’s situation, and who he thought was more at fault. “I personally feel like Colt teased her,” David said on the show. “He brought her to the U.S., he controlled money over her head, teased her with a lot of promises. I have a soft spot in my heart for her. I just think he’s a manipulator.” He also mentioned that he thinks Colt “taunts her” like a “dog in the corner” and that he’s a “master manipulator,” according to Starcasm.

Debbie wasn’t happy with his comments about her son. A 90 Day Fiance Instagram account run by Afterbuzz TV host Stacey Olivas shared an article about David’s comments, and Colt’s mom offered up her rebuttal in the comments:

David is a piece of sh*t. He is so desperate to stay relevant he will do and say anything to get attention. He doesn’t know Colt or Larissa. He doesn’t know anything about their life or their circumstances. He is definitely a media wh*re. He can’t possibly live without the help of his friend. He needs to keep his opinion to himself. That’s all he has to stay in the headlines, his opinion which is as screwed up as he is. Watch out David karma is still on your ass.

Debbie’s Instagram bio only reads, “The official and only Instagram account for Cookie Dough ‘dookie’ and her friends.” Her page doesn’t give much away about her current living situation or her life beyond the show, although she posts plenty of pictures of her pets for her fans.

Her page is primarily filled with pictures of her three cats, behind-the-scenes shots of the 90 Day Fiancé crew, and old throwback pictures of herself and Colt from several years ago. Before she and Larissa had a falling out, she had posted a few pictures of Colt and Larissa together, even including a shoutout to how “strong and fiery” her daughter-in-law was, and how she was proud to be her mother-in-law.

“I am so proud of my daughter in law. Watching tonight’s episode she is truly a self confident, strong, fiery lady. She has a heart of gold and the temperament of a wild cat. She stands for what she believes and she will never back down. Larissa is a one of a kind woman and she will never let you down. I’m proud to be her mother in law. I love the fact that she is my sons wife. Love you sweet girl,” she wrote on January 7.

Read More
90 Day Fiance
Colt Johnson's mother Debbie Johnson has been his biggest supporter since he first appeared on 90 Day Fiancé. Here's what we know about Debbie.