Cubicall is a custom phone booth manufacturer founded by Nick and Anthony Pucci. The siblings will appear on Shark Tank to pitch their manufacturing company, in the hopes that they can get expand their visibility and national reach.

Cubicall is based out of Los Angeles, California, and provides respite from noisy office settings. Learn more about Nick and Anthony, their respective backgrounds, and how they plan on getting their phone booths into stores across the country.

1. Cubicall Is a Custom Phone Booth Designed for Office Spaces

Cubicall manufactures custom phone booths that can be used in any office space. The walls on each booth are made with acoustic fill, which absorbs a wide range of sound frequencies. The interior of the booth is fitted with acoustic panels, according to the Cubicall website, which helps absorb outside sounds. The bi-folding doors utilize double pane glass, which also helps reduce noise.

The bifold door on the booths allow Cubicall models to fit into offices more conveniently. They can be designed to match an organization’s branding, office style or include a company’s slogan. Cubicall phone booths also come with two USB outlets, 120-volt outlet, and Ethernet cables that are built directly into the desk. A low power, low heat LED lights automatically turn-on when you enter the booth, and turns off once you leave. There’s also a fan built into the ceiling of the booth for air circulation.

The pricing for the Cubicall phone booth starts at $6,495. The exact price varies depending on the custom alterations made to each booth. The purchase of a Cubicall booth is tax free, and can be paid off in installments of $128 per month.

2. Nick & Anthony Were Marketing Executives Before They Founded Cubicall

Nick and Anthony Pucci worked as marketing executives prior to founding Cubicall. The latter studied marketing at California State University-Northridge, and worked for the family marketing agency; specializing in the luxury and fashion industries. The brothers discovered that 70% of offices in the United States had open designs, which made them more susceptible to distractions and workplace annoyances.

Anthony told the Chicago Tribune that co-workers would often critique his calls, or try to pass messages during a call. “I’m one of those people who gets drawn into a conversation,” he said. He tried to buy a phone booth to remedy the issue, but it reportedly cost $10,000.

He then tried to refurbish on old phone booth from a junkyard, but that didn’t work either. “They wanted $5,000, and it couldn’t fit into the doorway of my office,” he recalled. Anthony decided to join forces with his brother and create a better alternative.

Nick and Anthony’s father Michael Pucci is also credited as a founder of Cubicall. During an interview with CEOCFO Magazine, Michael spoke about the process of getting the booth design right. “One of the challenges was taking phone calls with our clients. We were near each other and are very opinionated,” he said. While on a phone you would hear sighs, laughs & whispers of what you should have said. Thus, it became antagonistic more than anything working in an open environment. We had to find a solution.”

“So, as a marketing agency, we started designing our own,” he continued. “We wanted something that was aesthetically pleasing, easy to build, acoustically pleasant, and could be moved / reassembled, just in case we moved offices again. The original concept was just for us. However, after we made it we said, Wow! Other offices might actually want these. After some initial testing, we got the idea to customize the booths, which has been a huge plus for us.”

Michael also said that the Cubicall booth is able to handle any form of communication. “The booth is ready to handle any communication needs. Whether you’re using a computer, tablet, cell phone or IP phone, Cubicall is prepared for any conversation,” he explained. “Within enough room for a computer and notebook, Cubicall is also great for the times where you just need the extra focus on privacy on an important project.” Check out Michael’s LinkedIn profile here. 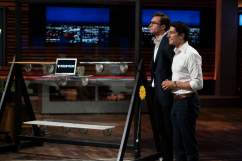 DeskView on Shark Tank: 5 Fast Facts You Need to Know

4. Cubicall Has Sold to Fortune 500 Companies Like IBM & Lyft

Since launching in 2017, Cubicall has sold to numerous Fortune 500 companies. According to Cision, these companies include IBM, Lyft, SAP and Cisco. They’ve also sold to educational institutions like the University of Michigan.

In November 2018, Cubicall partnered with Warner Bros and DC Entertainment to release a custom Superman phone booth. The design was adorned with classic Superman artwork, and was a subtle nod to the phone booths that Superman would use to change into his costume in the comic books.

“No other superhero nor property lends itself better to offices and phone booths than Superman,” Anthony said in a press release. “We’re thrilled to offer our clients and Superman fans this quintessential pairing for the first time.” 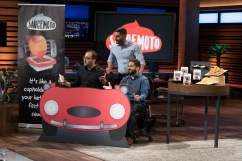 Saucemoto on Shark Tank: 5 Fast Facts You Need to Know

5. Nick & Anthony Consider Their ‘Shark Tank’ Appearance to Be a ‘Dream Come True’

Nick and Anthony discussed their Shark Tank pitch with PR Newswire. “Having the chance to pitch proven business experts and investors on the tenth season of Shark Tank is a once-in-a-lifetime opportunity,” Anthony said. “We’ve come a long way since creating a phone booth out of personal necessity two years ago. We’re now in a position to sell the Sharks on our unique value proposition – and we’re confident they’ll see the market opportunity.”

“My brother and I have been Shark Tank fans since season one,” Nick added. “Getting a chance to pitch the Sharks is really a dream come true and we believe we have a good shot at making a deal.” 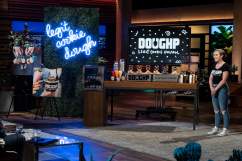 Doughp on Shark Tank: 5 Fast Facts You Need to Know