Given his success, some viewers may be curious about Laine’s background and what his plans are for his future and his music career. As we approach the end of the season, here’s what you need to know about Laine:

Laine said that he began playing guitar at age 6. He said that his mother got him a toy guitar from Walmart for Christmas, and after playing it, he asked her to buy him a real one. Laine credits both his parents with shaping his musical tastes.

“I remember my mom turning it on whenever the season started. We’d all watch it as a family,” he told Billboard. “My dad always played a classic rock station when I was a kid. I connected with it because it sounded so cool. I have a station on my Pandora now called ’50s, ’60s and ’70s radio, and I listen to it all the time. And I have a big playlist on my phone of old hits.”

Laine battled stage fright from an early age. His parents said that he was “very shy” despite his talents, and that he would go into the woods to perform when he first started singing. “It’s just hard to step out of the shell,” Laine told Talent Recap. Even on the American Idol finale, he admitted to feeling a bit jittery.

2. He Played His First Professional Gig At 14 & Cites Elvis As a Major Influence

Who’s ready for Sunday ?! ?? Get your voting ready! It’s gonna be a wild night ?

Laine told Billboard that he played his first professional gig with his family at age 14. “When I was 14, my brother and my cousins were playing at my uncle’s house on the back porch and I was at my house, right next door,” he recalled. “I heard them playing so I grabbed my guitar, ran over there across the yard in bare feet and asked if I could plug my guitar in and play with them. And then we started playing bars, restaurants and fairs when I was still 14 years old.”

Laine says that classic rock & roll artists like Chuck Berry and Little Richard influence, but his biggest musical idol is Elvis Presley. He credited the King with his decision to become a professional artist. “It was a year after I heard about Elvis. I learned enough to be able to teach myself, and I had a good ear for music. I could just listen to a song and play it,” he said. “I played guitar for another year after I quit lessons, and I was getting bored of just playing an instrument, so I started singing.”

“I would bungee cord my guitar case to the back of my four-wheeler and go out to the middle of the woods and sing my heart out,” he added. “And then one day, I asked my mom to listen to me and she told me that I sounded good. After that, I sang to friends at the campfire and they liked it.”

Miss fishing & then thinking you have a big fish but it’s this ? let’s all go fishing guys ??‍♂️? Who’s ready for Sunday night ?!

Laine is an American Idol alumni already. He auditioned for the show and got a ticket to Hollywood in 2016, but he only made it three weeks before he was eliminated. “This whole American Idol journey has given me opportunities to be a different person, because I’m a shy person,” he told Distractify after the elimination. “It’s helped me kind of get out of that shyness a little bit.”

“When I started my senior year, I just played locally and sang to have fun,” the teen said. “I didn’t have plans to go to college. I was just gonna work my butt off in the sun with a normal job. Then I got on American Idol, and my whole life changed.”

Laine said that his elimination from American Idol only furthered his desire to become a rock star. “For a whole year after, I played gigs every weekend. I wanted to stay active. I didn’t want to give up and I wanted to continue my career,” he said. “I gained knowledge from everything I did, and now I’m here again. The last year flew by.”

4. He Auditioned a Second Time & Made It After Going Along to Support a Friend

Ironically, Laine went to his second American Idol audition as a friend. He went there with the intention of bolstering his friend’s chances, but then he realized that people could audition multiple times. “I didn’t know it was possible to be able to do Idol twice, so I thought there’s no way that anything was going to happen,” he recalled. “When I looked at Katy, she looked at me and I knew exactly what she was about to say, and then she said it and I thought, ‘Oh, man.’”

“So I walked back and I sang,” he added. “I didn’t know what to do because my mind was just blank. And then I hesitated, because I wanted to just let that be Ashton’s audition,” he added. “But I ended up taking a [golden] ticket [to Hollywood] and now I’m in the top 14.”

Thank y’all so much. I’m so blessed. Here I come Louisiana! Tonight was the first time I played without a guitar and I wasn’t sure what to do but I pulled it together and got it done. Love y’all ❤️

In a shocking turn of events, Laine won American Idol season 17. Many predicted that the show’s other finalist, Alejandro Aranda, would take the top spot, but Laine managed to wow the judges with his unique blend of country and rock. After he gave his final performance, the judges were quick to heap praise upon him and declare him a future star.

Luke Bryan praised the unique quality in Laine’s voice, and said that people who have said quality are the ones who go on to be major players in the music industry. Katy Perry was similarly impressed, telling him that he wasn’t ready for Idol the first time around, but now that he’s matured as an artist, he’s ready to conquer the charts. 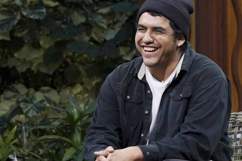