Lil Durk, a Chicago-based rapper, turned himself into the Atlanta police for attempted murder charges on Thursday, May 30, 2019, according to Atlanta Journal-Constitution.

The 26-year-old artist, whose given name is Durk Derrick Banks, was listed as wanted by Atlanta police in connection with a shooting in the parking lot outside the Varsity on February 5, 2019.

1. The Victim Was Taken to Atlanta Medical Center in Serious Condition

According to AJC, Atlanta police responded to a report of gunshots in the area around 5:45 a.m.

A 23-year-old male, Alexander Witherspoon, was found beside a vehicle and had been shot once in the thigh. Police recovered 13 shell casings from a pistol and a rifle in the parking lot, as well as a 9mm handgun. Witnesses reported seeing Witherspoon in a verbal dispute with another man before the sound of gunshots. Witherspoon was taken to Atlanta Medical Center in Serious Condition.

2. Lil Durk Revealed That He Planned to Turn Himself in on Social Media

On May 29, 2018, Lil Durk shared a message with his fans on Instagram and Twitter, “Turning myself in tomorrow.”

3. Lil Durk Released a Song, ‘Turn Myself In’ Before he Turned Himself In

“I went from Margielas to state shoes, Amiri denims to jump suits,” he goes on in the song. “Locked in a cell with a curfew, in population, they can hurt you. No PC, commissary and receipts, fan mail, I gotta reread. New rappers wanna be, can’t be me, I’m gangsta.”

One user shared some fan art.

Another user suggested Lil Durk is about to be in the “same boat as 69.” He is referring to rapper Tekashi69, who was arrested and sentenced to prison time at Rikers Island.

So lil durk gonna turn himself in then drop a song called “turn myself in” I hate the rap game ??‍♂️? pic.twitter.com/lXLvGuxiYA

Another user says he hates the rap game after Lil Durk released “Turn Myself In.”

Why does lil Durk have to get locked up a week before I was suppose to see him in concert ?

Another user is upset that Lil Durk turned himself in before she had the chance to see him in concert.

5. Lil Durk Was in the Middle of His STTS3 Tour 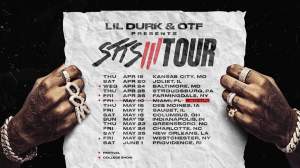 Lil Durk was in the middle of his STTS3 Tour when he turned himself in at the Fulton County Jail in Atlanta, Georgia.

The tour, which was supposed to last from April 18, 2019 to June 1, 2019. The rapper had performed in Kansas City, Baltimore, Miami, Des Moines, Columbus, Indianapolis and New Orleans, among others. He was supposed to perform in Westchester, New York on May 31 and Providence, Rhode Island on June 1.