Getty The Met Gala 2019 takes place on the first Monday of May each year, with this year falling on May 6. Read on for details about the gala, including the time, channel and theme.

Met Gala 2019 is upon us, and this year’s theme is “Camp: Notes on Fashion.” The Met Gala always takes place on the first Monday of May, landing this year’s event on May 6. The red carpet coverage starts rolling out at 7/6c, so keep your eyes peeled for some of the biggest fashion statements of the year.

The Met Gala will take place at the Metropolitan Museum of Art in Manhattan’s Upper East Side neighborhood, where it does every year. Entry to the gala is exceedingly expensive (with tickets upwards of $30,000), and proceeds serve as “the main source of funding for the Costume Institute’s exhibitions, acquisitions and capital improvements,” according to Today. 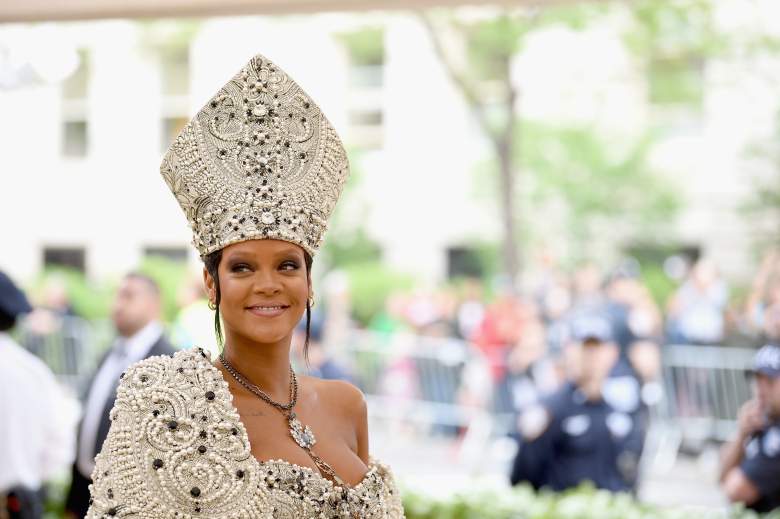 GettyNEW YORK, NY – MAY 07: Rihanna attends the Heavenly Bodies: Fashion & The Catholic Imagination Costume Institute Gala at The Metropolitan Museum of Art on May 7, 2018 in New York City. (Photo by Jason Kempin/Getty Images)

According to Vogue, the night begins with a cocktail hour, in which guests walk the red carpet and explore the new exhibition before sitting down to dinner and the evening’s performances. The event gives celebrities and A-listers the chance to dress up in elaborate ensembles and snag a photo-op on the famous Metropolitan Museum of Art’s steps.

This year’s “camp” theme doesn’t involve the outdoor activity of sleeping in tents; in fact, GQ claims it’s an “aesthetic that is considered far out of taste.” At this year’s “Notes on ‘Camp'” exhibit, guests will have the opportunity to see more than 250 objects dating from the 17th century to the present, Today reports.

“Camp’s disruptive nature and subversion of modern aesthetic values has often been trivialized, but this exhibition will reveal that it has had a profound influence on both high art and popular culture,” Max Hollein, director of the Met, said in a news release. “By tracing its evolution and highlighting its defining elements, the show will embody the ironic sensibilities of this audacious style, challenge conventional understandings of beauty and taste, and establish the critical role that this important genre has played in the history of art and fashion.”

In 2017, the theme of the gala was ‘Rei Kawakubo/Comme des Garçons’ – in homage of Rei Kawakubo, the fashion designer of the avant-garde Japanese label, Comme des Garçons; celebrities dressed the red carpet in an array of bold hues, according to Glamour. Last year’s theme was “Heavenly Bodies: Fashion and the Catholic Imagination.”

⁣“Camp [is] a third stream of taste, that encompasses the curious attraction that everyone—to some degree at least— has for the bizarre, the unnatural, the artificial and the blatantly outrageous.” —Thomas Meehan, 1965 ⠀ Spring has sprung—and Camp is just around the corner. ? The @metcostumeinstitute’s “Camp: Notes on Fashion” opens in two weeks! #MetCamp ⠀ ?: Ensemble, Jeremy Scott (American, born 1975) for House of Moschino (Italian, founded 1983), spring/summer 2018; Courtesy of Moschino. Photo © Johnny Dufort, 2019.

Hosting this year’s event alongside American Vogue editor Anna Wintour are Lady Gaga, Harry Styles and Serena Williams. Although the Met Gala is a charity event, the gale is invitation only and there is a waiting list to get a ticket. According to The New York Times, invitations are typically based on a person’s status, and generally includes the latest models and major talent in the world of fashion, film or music.

Tune in Monday at 6/7c to catch the red carpet coverage of the 2019 Met Gala.