90 Day Fiancé‘s Nicole Nafziger has taken to Instagram to assure her fans that she is not struggling financially, despite the fact that she has been looking for another job to bring in some extra income.

Nafziger, who has appeared on multiple seasons of 90 Day Fiancé and 90 Day Fiancé: Happily Ever After? has had issues in the past with her financial situation, and has struggled to afford her husband Azan Tefou’s visa. However, Nafzinger assures fans that she and Azan are doing well and that they shouldn’t be concerned about her financial business. 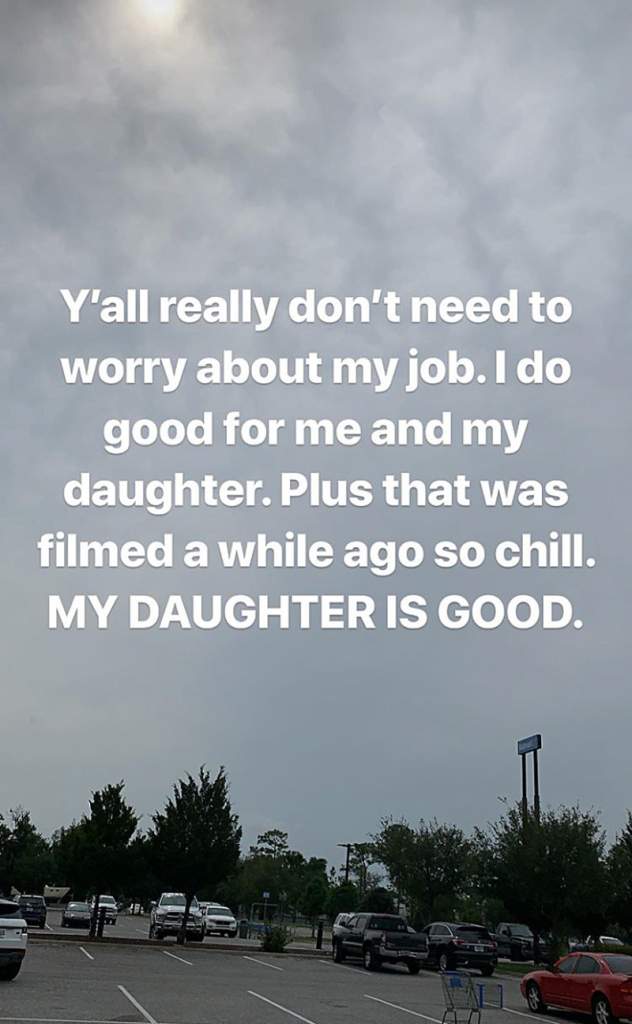 Nicole Nafziger’s Instagram story telling fans to mind their own business about her finances.

“Y’all really don’t need to worry about my job,” she wrote on her Instagram page. “I do good for me and my daughter. I have a job, but it’s none of your business,” she added. “Yes I’m on the show, but my finances and job are none of your business unless I decide to talk about it.”

Nafziger also noted how the job hunting episode was “filmed a while ago,” telling nay-sayers to relax. “MY DAUGHTER IS GOOD,” the TLC alum concluded, according to In Touch Weekly.

Her financial situation gained renewed interest from fans after she had an awkward interview with a staffing agency during a recent episode of the show. She told the cameras that she was hoping to earn some extra money to help fund a flight to reunite with Azan, but the agency was unimpressed with Nafziger’s work experience and skills, and even less thrilled that she didn’t bring a resume with her to the interview.

“Since I got back from Morocco, it’s hard because there are a lot of times where money is tight,” she said in the episode. “Sometimes it can be really challenging just to make ends meet to support me, May and Azan.”

After watching Nafziger’s interview at the staffing agency, fans took to Instagram to question the reality star about her finances, where she defended herself vehemently and basically told fans to mind their own business.

Nafzinger has worked as Starbucks as a barista in the past, and she promotes several different products on her Instagram page, which presumably makes her some extra income on the side. In addition to her role on the TLC show, Nafzinger makes money by charging $50 for personalized videos on Cameo.

At one point, the reality star also said that she and her husband had planned to open a beauty store in his native Morocco in order to generate some steady income, according to Cheat Sheet. She said the couple would put $6,000 that they had saved for their wedding toward the venture, but later admitted that there was no store — and no extra $6,000. She said that she’d lied about both, adding “we suck at reality TV” and “I’m so tired of this show.”

The stars of 90 Day Fiancé reportedly make a significantly lower amount of money than many other reality stars as well, with most of them making as little as $15,000 per season, which has also helped fuel rumors that she is struggling financially.

Nafziger hasn’t officially released her net worth or how much income she makes, but she assures fans that she, Azan and her daughter are totally fine.

READ NEXT: Is Jon Rachel’s Baby Daddy on 90 Day Fiancé? No.