Red Reddington is the enigmatic force behind NBC’s The Blacklist. His identity remains shrouded in mystery, but as we approach the season six finale, the showrunners and the actor who plays him, James Spader, have hinted at some huge revelations about his past. Will his true identity be revealed? Will fans discover who Red Reddington really is?

We’ve already gotten some huge revelations throughout season six. During the episode “Rassvet”, it was revealed was a man named Ilya Koslov, who assumed the identity of the real Reddington after his death. He enlisted Dr. Hans Koehler, a face-altering surgeon, to change his appearance, and he learned all of Reddington’s most private secrets.

Reddington’s Identity Seemed to Be Revealed In the Episode ‘Rassvet’

Red doesn’t wait for an invitation to join dinner. #TheBlacklist

The episode shows Ilya actually going under the knife to become Reddington, and Gabriel Mann, the actor who plays young Ilya, even adopts James Spader’s vocal timbre when we see see him withdrawing money from the bank. It all seems very legitimate, and Liz’s shock upon discovering this seems to fall in line with the rest of the show’s big moments.

That said, series creator Jon Bokenkamp and executive producer John Eisendrath have hinted at the possibility that there’s more to Reddington’s past than we think. The former says that there will continued to be revelations about Reddington, and his past, as we head into the finale and season seven.

With the task force in jail, there’s no time to waste. #TheBlacklist

“The story we’ve told this year, of Liz’s quest to find out Raymond Reddington’s identity — and the answer that Dom gave her in Episode 19 — is one that brings Liz even closer to Raymond Reddington, not farther apart from him,” Bokenkamp told TV Line. “He never liked the idea that she was looking into this, he has made that clear from the beginning… What that portends, going forward, is continued friction on the question of his real identity.” Eisendrath added that the season finale will “spark new questions” about Red and Liz’s relationship.

Bokenkamp also told The Wrap that the season six finale will resolve certain story arcs, while setting up arcs for the future. “So there will be a really satisfying ending and yet it might be undercut by a bigger mythology bombshell,” he revealed. “Who Raymond Reddington is and why he entered Elizabeth Keen’s life remains to be a question that we haven’t entirely wrestled down. And so there maybe a surprise or two in terms of the larger mythology of the entire series.”

This would imply that Reddington’s true identity may be unclear, and that the backstory about Ilya is either fabricated to throw Liz off course, or that Illya is a real person, and we’ve yet to discover his fate. 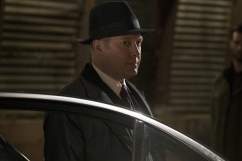 ‘The Blacklist’ Season 7: Is the Show Cancelled or Renewed?

Read More
James Spader, NBC, The Blacklist
Red Reddington's identity continues to be a mystery heading into 'The Blacklist' finale. Learn more about his past.