Getty Simon Cowell has been with his partner Lauren Silverman for several years, with whom he shares a son. However, the couple is not married at this time.

Simon Cowell will be returning to judge the fourteenth season of America’s Got Talent, alongside fellow judges Howie Mandel, Gabrielle Union and Julianne Hough. Cowell has been judging the talent series since 2011.

With all eyes on the Cowell and the other AGT judges, fans might have renewed interest in their personal lives, and whether or not he has a wife and/or children. Read on for information on Cowell and his family below:

1. He is Not Married But Has Been Dating His Partner For Several Years

‪Simon Cowell and Lauren Silverman attended the Nutcracker Ball for his children's charity, Together For Short Lives, at One Marylebone this evening. #simoncowell

Cowell, one of the best-known TV judges of all time, is not married, although he has been with his partner – Lauren Silverman – for several years now.

Cowell met Silverman at Barbados’ Sandy Lane resort in 2004 when she was vacationing with her then-husband, real estate mogul Andrew Silverman, according to  Good Housekeeping. The two hit it off immediately but didn’t start dating for some time following their first encounter. 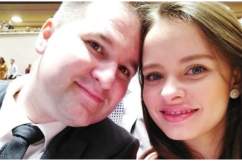 Alan & Kirlyam, 90 Day Fiancé Update: Are They Still Together?

2. Cowell & Silverman Began Dating in Secret After They First Met, Which Kicked Off Quite The Scandal

Simon Cowell and Lauren Silverman arrive at tonight’s Pride Of Britain Awards. You can see the awards on @itv on Nov 8th. @simoncowell @prideofbritain #laurensilverman #prideofbritain

Good Housekeeping reports that Cowell and Silverman began dating in secret sometime after they met, but kept their relationship under wraps as Silverman was still married. However, when she found out she was pregnant in 2013, the couple was forced to make their relationship public, which caused quite the scandal across tabloid headlines for months following the news.

“Soon after, her husband filed for an at-fault divorce, citing adultery as the main reason,” Good Housekeeping reports. “Andrew and Lauren [Silverman] finalized their divorce in November of that year. In the divorce settlement, there was a strict stipulation that lasted until January 2015, which stated that Simon was required to stay away from the couple’s son, Adam, or face a $50,000 penalty.”

3. They Share One Child Together – Their Son Eric, Who Cowell Claims Has ‘Softened’ Him

#Repost @simoncowell ・・・ Eric reading his new favourite book 'Come Find Me' and it's illustrated by my friend @terrycrews!

Silverman gave birth to Cowell’s son Eric in February of 2014, and Cowell claims fatherhood “softened” him. “People have asked me if I have changed since I have had Eric and of course you do, you can’t help it,” he told DailyMail.

However, Cowell struggled with being a parent for the first few months. “During the first eight or nine months I was thinking, ‘I don’t think he likes me very much. He does remind me of me when I was younger because he knows how to try it on and how to get away with things,” he told Entertainment Tonight. 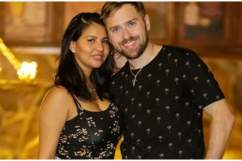 Paul & Karine, 90 Day Fiancé Update: Are They Still Together?

4. He Wants More Children With Silverman But He Becomes Bashful Every Time Marriage is Mentioned

Mini Mogul! Eric Cowell is well on his way to following in dad’s footsteps! Who else loved the start of The X Factor Final tonight?! #simoncowell #ericcowell #xfactor #babyshark

Although there is no word on whether or not the couple plans to tie the knot (and Cowell apparently becomes rather bashful every time its mentioned), they are not ruling out another baby (or two) in the near future.

“I had a brother when I was younger so I think it’s kind of cool to have two,” he told Extra. “Well, two or three.”

5. Cowell isn’t Proud of How He & Silverman First Began Dating & Says He Didn’t Mean to Hurt Anybody

Cowell had admitted in the past that he isn’t proud of that fact that his and Silverman’s relationship began with a scandalous affair.

“It is not something I am proud of or wanted to happen in terms of hurting anyone. It just happened,” Simon told The Mirror.

There have also been reports over the last year that Cowell and Silverman’s ex-husband Andrew have buried the hatchet, although this hasn’t been confirmed.

Read More
AGT, America's Got Talent, Celebrities
Simon Cowell has been with his partner Lauren Silverman for several years, with whom he shares a son. However, the couple is not married at this time.