Simon Cowell has been with Lauren Silverman for several years, and the couple have a son named Eric. That said, Cowell and Silverman consider themselves to be romantic partners, and are not officially married. Read on to learn more about about the America’s Got Talent judge and his relationship.

Cowell and Silverman have known each other since 2004, but they didn’t become romantically involved until 2013. Shortly after news of their romance broke, Silverman’s husband and Cowell’s friend, Andrew Silverman, filed for an at-fault divorce. According to Us Weekly, he cited adultery by his wife and named Cowell as a co-respondent.

Cowell declined to comment on the situation at the time, preferring to keep the details of his relationship with Silverman under wraps. “I would love to [talk], but I have to respect a lot of people’s feelings right now,” he explained. “There a lot of things I will eventually clear up when the time is right, but I really have to be sensitive because there’s a lot of people’s feelings involved here.”

Both Andrew and Lauren Silverman issued statements regarding their marital status and their intention to amicably raise their son Adam. “I am committed to sorting things out with Andrew as amicably as possible to ensure the well-being of our son,” the latter wrote in her statement. “I would hope for some space and privacy in order to work through this.” They finalized their divorce in December 2013.

Silverman gave birth to Cowell’s first son Eric on February 14, 2014. Cowell told Daily Mail that becoming a father has changed his outlook on things for the better. “People have asked me if I have changed since I have had Eric and of course you do, you can’t help it,” he said. “In a very positive way you start, particular now he’s four, looking at the world through his eyes as well, which is fun because we get to watch great movies together!”

The couple aren’t ruling out the possibility of having a second child. During a recent interview with Extra, Cowell talked about their plans for the future. “I had a brother when I was younger so I think it’s kind of cool to have two,” he revealed. “Well, two or three.” That said, the couple have not talked publicly about their plans to get married. Cowell laughed off marriage rumors during a 2018 episode of Britain’s Got Talent, after a fellow judge put him on the spot. Check out the video here.

Cowell recently opened up about his diet, and how his family inspired him to shed 20 pounds. “Sometimes we get a reminder that we’re not invincible and this was certainly mine,” he told the Sun. “They think I fainted because I had low blood pressure and so I have got to really take good care of myself to sort that out. After all, I am a dad and have more responsibility than ever.” 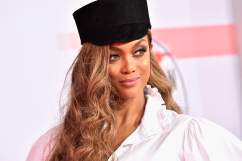 Did Tyra Banks Quit ‘AGT’ or Was She Fired?