UPDATE: Longtime coach Adam Levine, after being with the show for 16 seasons in a row, has decided to leave The Voice. Gwen Stefani will replace him for season 17. Many fans know she was previously a coach on a couple seasons ofthe show, which is where she met boyfriend, co-star Blake Shelton. Voice host Carson Daly announced Levine’s quitting on May 24, 2019, during a segment on the Today Show.

With season 16 of The Voice coming to an end, fans already have season 17 on their minds. Fortunately for dedicated viewers, the show airs two seasons per year, which means that it should follow its usual schedule. The Voice’s premiere date for season 17 should take place towards the end of September 2019 this Fall.

As for the cast of judges, which often changes, there will be no differences from season 16. All four coaches are returning to the panel – Kelly Clarkson, John Legend, Adam Levine, and Blake Shelton. Both Shelton and Levine have been judges on the show since the start of the series. Then, over the years, some judges have come and gone, while others have alternated seasons on the panel. Season 17 will be Clarkson’s fourth consecutive time as a judge, while it will be Legend’s second time. He joined the cast in season 16.

Several of the judges have major projects going on. For one, Clarkson has her upcoming new talk show in the works for the Fall and it was promoted during the live finale episode of The Voice season 16.

According to Country Living, The Kelly Clarkson Show will air, starting September 9, 2019, on the same network as The Voice, NBC. It is set to air at 2 p.m. local time. On the Today Show, Clarkson dished on what made her decide to come out with a talk show and she said, “I have a TV show coming out and I’m pretty stoked about it. I’m super excited. I never thought I’d have a TV show but I really love talking and I love people, so I hope it goes well. It’s gonna be musical … it’ll be a little music in it, every episode, and I’ll be talking to people. I love communication and I feel like there’s a lot of brokenness with that in the world right now and there’s so much division. So I do want my show to be just really inclusive and about connection.”

But, Clarkson isn’t the only Voice coach venturing out further in television.

On May 28, 2019, following the premiere of America’s Got Talent, the new reality competition show Songland will make its debut, also on NBC, at 10 p.m. ET/PT. Two Voice coaches are involved with this project – Adam Levine is an executive producer and John Legend will be appearing at least on episode 1.

E! News has reported that the plot synopsis of Songland states, “In Songland, a guest musician and producers Ryan Tedder, Ester Dean and Shane McAnally will hear unknown songwriters pitch original material. After the four performances, the artist will pair off three of the four songwriters with producers where they’ll then go off to shape the song. In the end, a winner will be chosen and their song will be recorded and released to the public.” 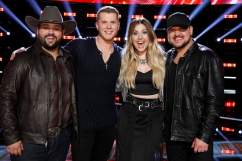