Getty Tyler, The Creator performs at the Panorama Music Festival.

Tyler, The Creator is set to release his fifth studio album tonight. The album is titled IGOR, and will be the rapper’s first new release since 2017’s Flower Boy. It was several snippet teasers, including ones for “A Boy Is a Gun” and “New Magic Wand” featuring Santigold.

IGOR will be released at 9 p.m. PT on Thursday (May 16) or midnight ET on Friday (May 17) depending on your time zone. We’ve listed all the different platforms that the album will be released on, and the ways in which you can listen below.

You will be able to stream Tyler, The Creator’s new album on iTunes and Apple Music. If you have an Apple Music account, you can go into the app on your phone or tablet and set the notifications to alert you when the album is out. Click here to learn how.

Based on the standard release schedule for Spotify, Tyler’s IGOR will also be available to stream on the platform. If you don’t have a Spotify account, you can sign up for one here and pay only $0.99 for the first three months.

Tyler, The Creator’s album will also be available to listen to on Tidal. The streaming service offers a free 30-day trial with Tidal Premium, which provides  access to music videos and curated playlists.

IGOR, IGOR ( golfwang.com for this shirt)

Tyler has stayed relatively quiet since the release of his last album, the critically acclaimed Flower Boy. He announced IGOR on May 6, providing the album artwork and a snippet of what appears to be one of the album tracks, “IGOR’s Theme.”

The album artwork was designed by Lewis Rossignol, who spoke to Complex about his style and what it was like working alongside Tyler. He said that the rapper reached out to him on Instagram and asked him to collaboration. “That’s pretty much how everybody finds my work,” he explained. “Instagram drives probably 95% of my business. When he first messaged me, he said he was interested in collaborating, but he wasn’t really that specific.”

Rossignol went on to say that Tyler wanted an aesthetic that was different from his previous albums. “He FaceTimed me and said he really wanted me to do a portrait of him,” he continued. “He was really easy to work with. He’s a creative, so he understands the process, and he gave good notes. In the last week or two, we were constantly texting back and forth, and I was showing him different version and colors that we could use.” 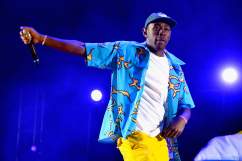