Wu-Tang Clan are the focus of the new docuseries Of Mics And Men. The highly anticipated Showtime series is directed by Sacha Jenkins, and traces the history of the rap group from its humble beginnings in Staten Island to its worldwide success.

Wu-Tang Clan: Of Mics And Men premieres Friday, May 10, and all four episodes will be available at 9 p.m. ET/PT on Showtime. If you don’t have cable or don’t have Showtime, you can watch the series live or on-demand on your computer, phone or streaming device by signing up for one of the following cable-free, live-TV streaming services.

If you have Amazon Prime or want to start a free 30-day trial of Amazon Prime, you can watch all live and on-demand Showtime content through the Showtime Amazon Channel, which also comes with a free 7-day trial.

Once you’re signed up for both Amazon Prime and the Showtime channel, you can then watch Of Mics And Men either live as it airs or on-demand later. With either option, you can watch on your computer via the Amazon website, or you can watch on your phone (Android and iPhone compatible), tablet, Roku, Amazon Fire TV, Fire TV Stick, Xbox One, PlayStation 4 or other streaming device via the Amazon Video app.

Whether you already have FuboTV or you want to start a free 7-day trial, Showtime is available as an add-on.

Once signed up, you can either watch Of Mics And Men live as it airs, or you can watch it on-demand anytime after it airs. With either option, you can watch on your computer via the FuboTV website, or on your phone (Android and iPhone supported), tablet, Roku, Apple TV, Amazon Fire TV, Chromecast or other supported device via the FuboTV app.

Whether you already have Hulu or you want to sign up for a new subscription, Showtime is available as an add-on to either Hulu or Hulu with Live TV.

Once signed up, you can watch Of Mics And Men live as it airs, or you can watch episodes on-demand anytime after. With either option, you can watch on your computer via the Hulu website, or on your phone (Android and iPhone supported), tablet, Roku, Apple TV, Amazon Fire TV, Chromecast, Xbox One, PlayStation 4, Nintendo Switch, Echo Show or other streaming device via the Hulu app.

‘Of Mics And Men’ Preview

Of Mics And Men starts with Wu-Tang’s formation in 1992, how they rose to global stardom through their group and solo releases. The series will also detail the circumstances that led to their demise. Sacha Jenkins told Complex that he chose to direct the series because of the group’s struggles and how they parallel what people are going through today.

“So many people know and love Wu-Tang, but I wanted people to understand all the things that they had to endure,” he explained. “What they faced is what young black men and women face today. And so, it was a prominent case that was directly connected to the group as they were ascending, as their fame was starting to happen.”

“Whenever these guys talk about something really traumatic, there’s a laugh afterwards. To me, that is also how music has always been,” Jenkins added. “Art has been a way for us to deal with this oppression. These are things that I didn’t really realize going into it. Why is there a laugh? Because it’s the only way we’ve been able to process and deal and survive—dealing with what we’ve had to deal with.”

The group’s leader, RZA, admitted that Of Mics And Men touches on some unflattering topics. “Yeah. I was uncomfortable. Listen, there’s a lot of uncomfortable parts of this documentary for me,” he said. “Might as well say that out front. But at the same time, we allowed Sacha and his team to put that light on it. But, at the end of the day, it’s like our music: it’s objective, it’s art, it is what it is. Let it exist and let the world see it and decide, decipher for themselves.”

“I won’t agree with some of it. The most beautiful thing I get from this documentary is that everybody has a perception of it,” he continued. “When I see some things that I disagree with, I respect that, you know what, that’s how he saw it. And it’s hard. But I didn’t raise my voice to veto nothing in that documentary. 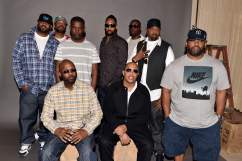